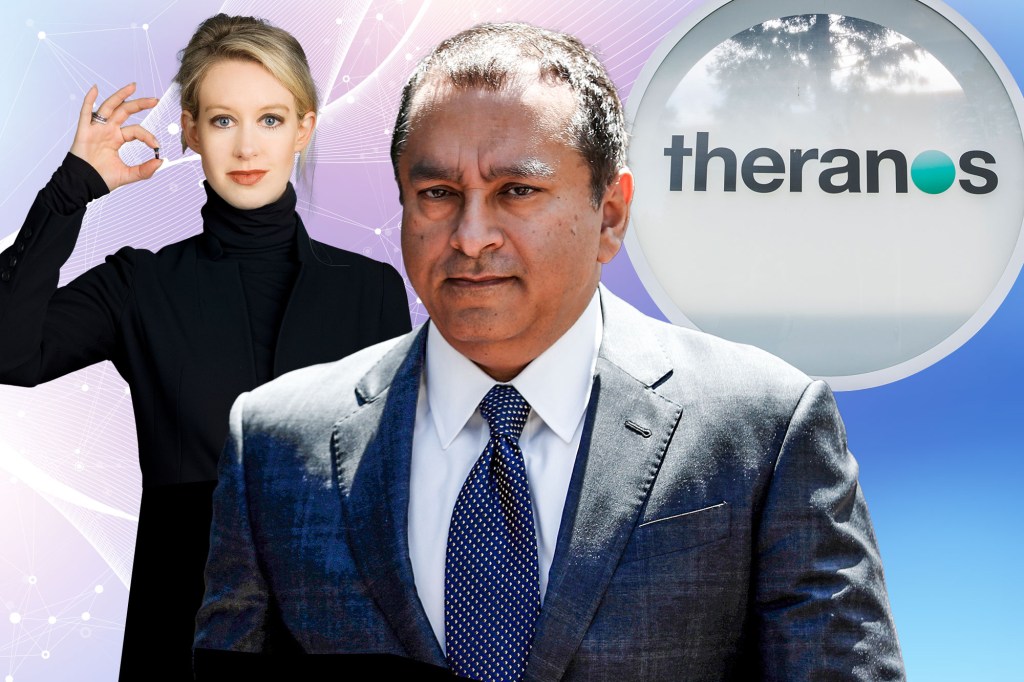 For a while, it was always Sunny in Silicon Valley.

From 2009 until 2016, Ramesh “Sunny” Balwani — then the boyfriend of Elizabeth Holmes and president of her buzzy Theranos, Inc. — seemed to be everywhere in his puffy-sleeved shirts: traveling the world on behalf of the company, leaving a trail of cologne, tooling around in his Porsche with its DAZKAPTL vanity license plates (a reference to Karl Marx, naturally).

In the coming weeks, though, America will learn more about Balwani than he ever intended to reveal.

As a key player in the Theranos scandal, he is set to stand trial for his role in fraud and deception related to blood testing machines that never did what they were claimed to do. Like his former partner — who was found guilty on four counts of fraud in January and is out on $500,000 bail while awaiting sentencing  — he faces multiple counts of wire fraud. Jury selection is currently underway in San Jose, Calif. 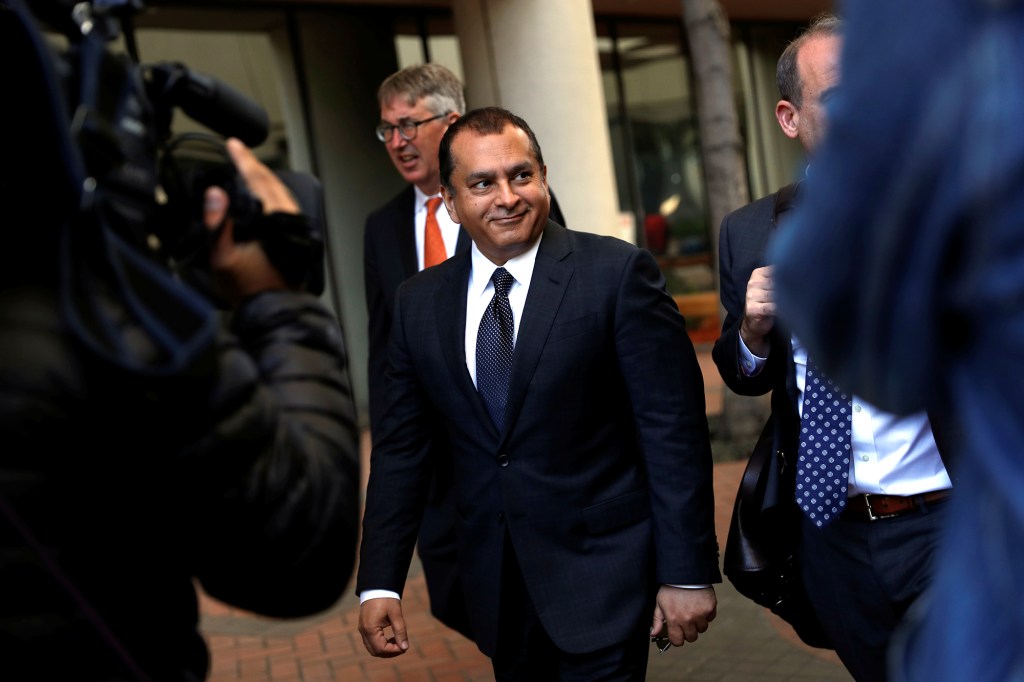 Sunny Balwani is set to stand trial for wire fraud charges related to Theranos blood testing machines that never did what they were claimed to do.REUTERS

During her trial, Holmes claimed her ex was physically, emotionally and sexually abusive.

“He told me that I didn’t know what I was doing in business, that my convictions were wrong, that he was astonished at my mediocrity and if I followed my instincts I was going to fail,” she testified. “He would force me to have sex with him when I didn’t want to because he wanted me to know he still loved me.”

She also alleged under oath that he exerted high degrees of control over her. Balwani is said to have told Holmes what to eat, estranged her from her family, and put her on a schedule that had her working seven days per week. According to Slate, he snooped on her text messages and hurled “sharp, hard objects” at her.

“My take on Sunny is that he is a highly manipulative, bald-faced liar,” a source close to the situation told The Post. “He has been caught dead-to-rights lying.” 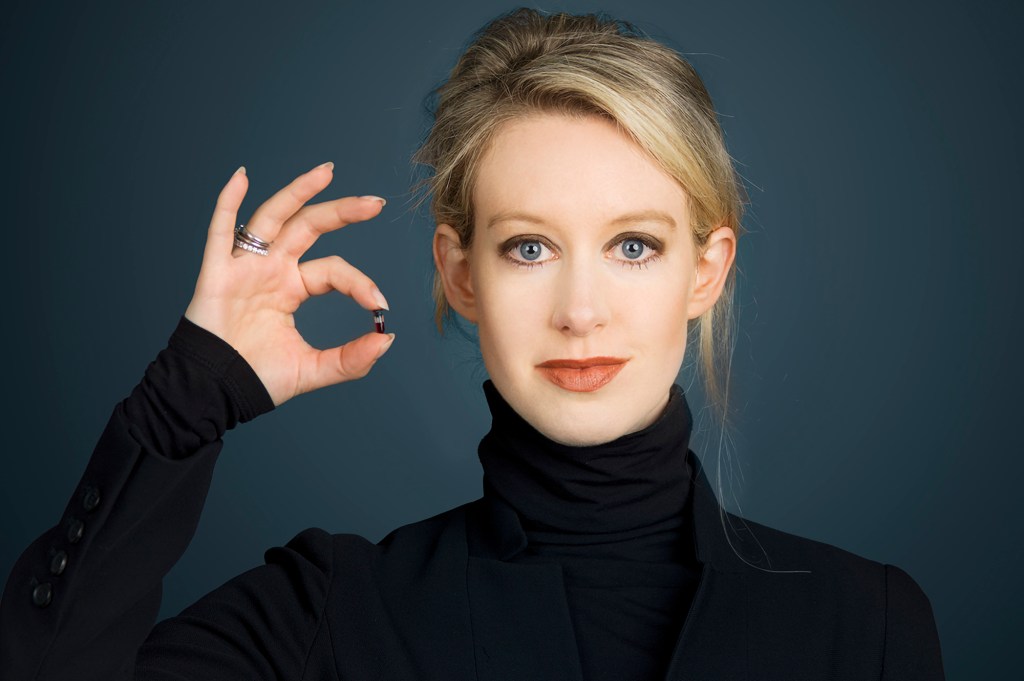 Elizabeth Holmes, Balwani’s former partner, claimed during her own trial that Balwani was physically, emotionally and sexually abusive.Getty Images

Theranos’s product, the so-called Edison machine, promised to deliver accurate, low-cost blood tests in record time with just a finger prick. But after the company reportedly raised some $724 million in investments, the machine was proved inoperable — never mind that it was promoted by Holmes and Balwani as working just fine, potentially putting test subjects at risk.

According to the book “Bad Blood” by John Carreyrou, one of the Wall Street Journal writers who broke the Theranos fraud story, Balwani was “a force of nature but not in a good way.” 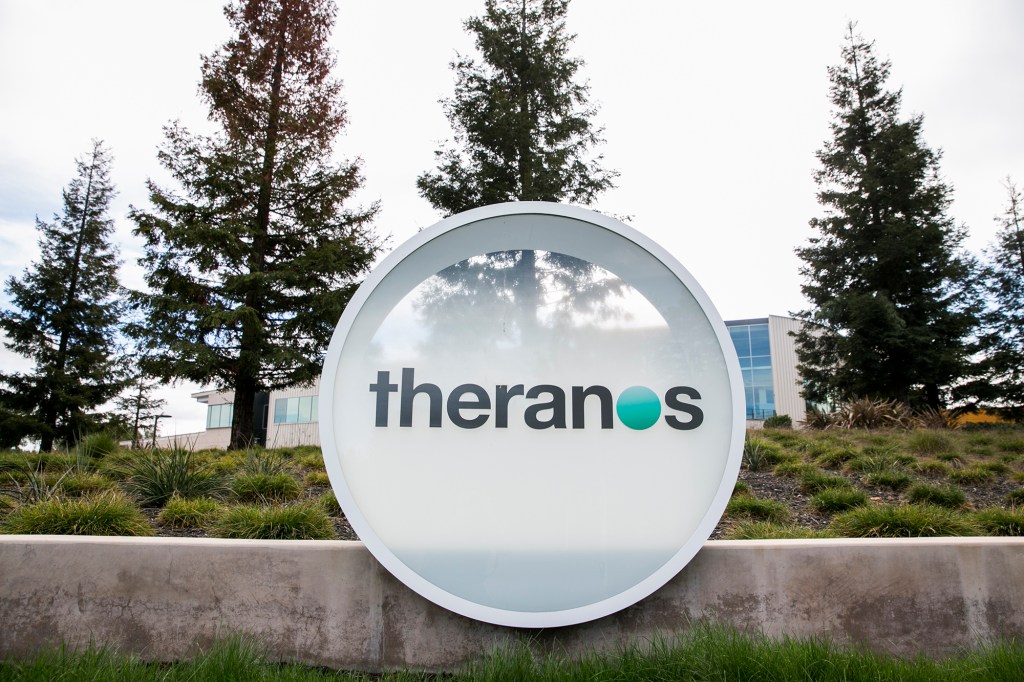 He arrived in the United States from Pakistan in 1986 for undergraduate studies and put in a decade as a software engineer at Microsoft and Lotus. In 1999, he signed on with a startup called Commerce.Bid, which developed a software program for business-to-business auctions.

The company hit bigduring the dot-com tsunami of the late ’90s, sold in November 1999 for a stunning $232 million, and Balwani, the president and CTO, received a windfall of $40 million.

By the time he met Holmes in 2002 in Beijing — he was 37 and enjoying his riches; she was 19 and studying Mandarin while attending Stanford — he seemed like an apt mentor. 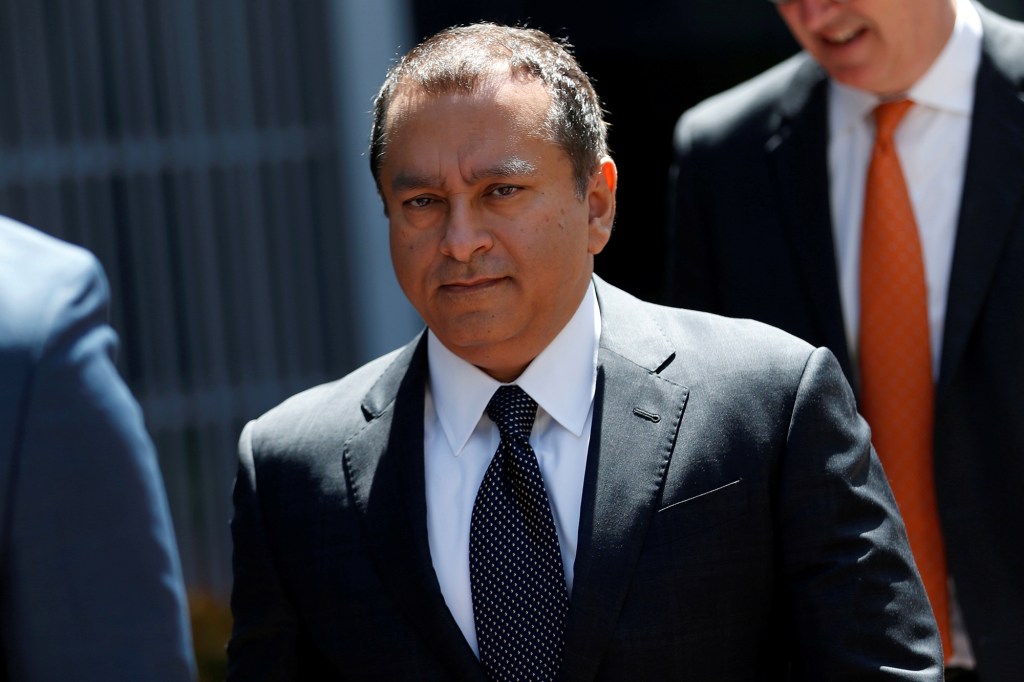 He joined Theranos in 2009 and quickly made his presence felt. According to “Bad Blood,” during an early meeting he attended at Theranos, Balwani claimed to have “written a million lines of [computer] code.”

That was viewed as ridiculous by Theranos employees. As Carreyrou points out in his book, teams of developers wrote the Windows operating system at only 1,000 lines per year.

Also disturbing, according to “Bad Blood” and to the close source, was Balwani’s personal interactions with employees and investors.

“He was ruthless within Theranos,” said the source. “He intimidated personnel and made sure employees were deterred from saying anything negative about the company.” 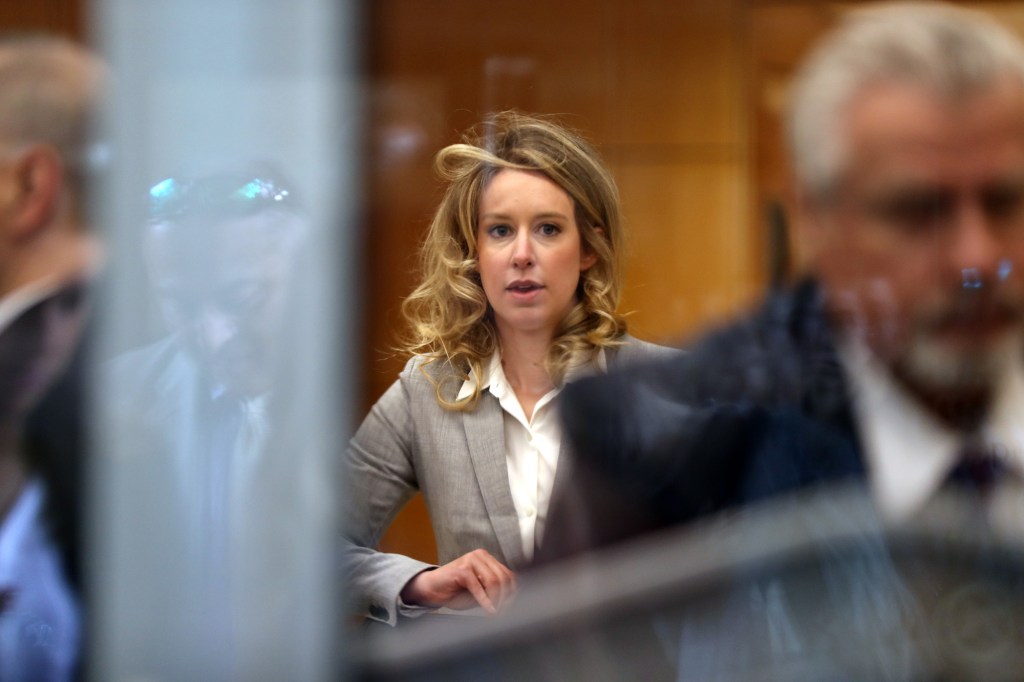 Holmes was found guilty on four counts of fraud in January and is out on $500,000 bail while awaiting sentencing.Getty Images

According to “Bad Blood,” he had no qualms about putting down employees and reprimanding them with an “in-your-face management style.” This later evolved into full-blown paranoia and accusations of trade secrets being stolen. According to Hastings Law Journal, NDAs were so much a part of the culture that when a departing employee refused to sign one, Balwani summoned the police. To explain the crime being committed, he insisted that the employee “stole property in his mind.”

But Balwani failed to work his dark magic with employee Tyler Shultz, the grandson of George Shultz, a former secretary of state and a board member of Theranos. In early 2014, Tyler became an initial whistle-blower at the firm, reporting to New York State Department of Health regulators that the blood testing machine was a sham.

Soon after, he told CBS News, Balwani responded aggressively. Shultz said that the boss told him he was “arrogant, ignorant, patronizing, reckless … [and] that if I had any other last name, I would have been held accountable [for airing concerns] to the strongest extent.” 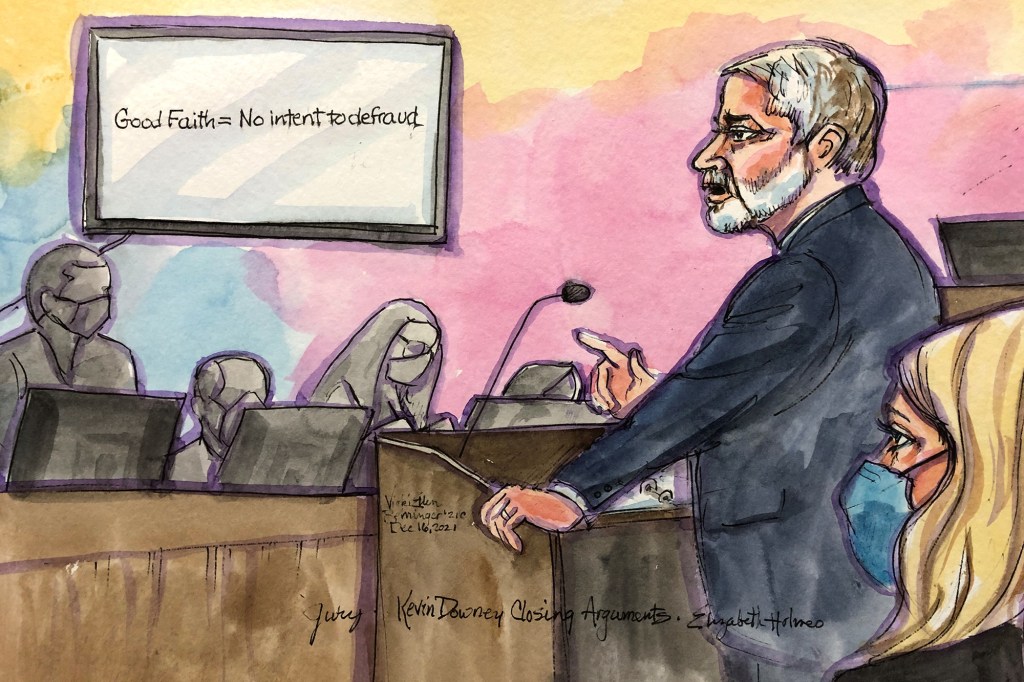 “He told me that I didn’t know what I was doing in business, that my convictions were wrong, that he was astonished at my mediocrity and if I followed my instincts I was going to fail,” Holmes (lower right) testified of Balwani.REUTERS

Shultz quit the firm in April 2014. By the next year, the jig was up for Theranos as news broke about fraudulent claims and deceptive practices.

“Sunny pushed back whenever someone requested more information about the workings of the machine,” said the source. “They brought people in, so-called VIPs, who were big investors, and would show off the technology. They did finger tests, took blood and put it into the fake machines. Then, while the VIPs were on the tour, the blood would be put into a legitimate machine [from an outside manufacturer]. Theranos staffers came back with accurate results that were purported to have come from the Edison.”

But, the source believes, Balwani’s alleged misdeeds were not purely out of cold-hearted malice.

“Sunny is a smart guy. I don’t think he set out to commit fraud, but the company needed to raise money for [Holmes’] pipe dream — maybe it would happen, maybe it wouldn’t, but he thought he had something that would work eventually,” the source said. “Until then, though, he would lie.”