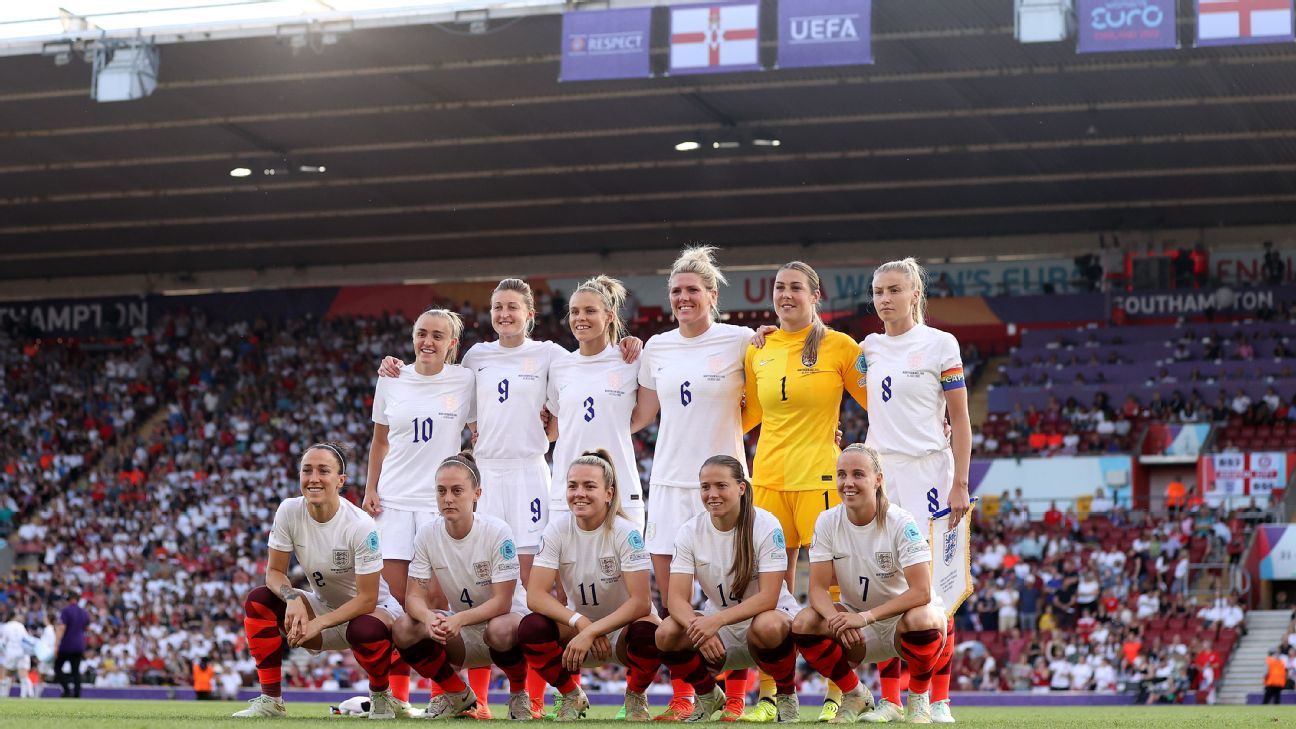 England have just three non-white players in their Euros squad, with the team that’s dominating the tournament largely lacking in representation, something the FA is already trying to address. Alex Pantling – The FA/The FA via Getty Images

They have been the outstanding team of Euro 2022 so far with three straight wins, 14 goals scored and none conceded, a player leading the race for the Golden Boot and games played in front of capacity stadiums. But the positivity surrounding England’s pursuit of glory has been impacted by claims that Sarina Wiegman’s team lacks the diversity of the country it represents.

While Gareth Southgate’s men’s England side reached the final of Euro 2020 last year with 11 players of Black or mixed heritage in the 26-player squad, only three of the Lionesses’ 23-player squad — Nikita Parris, Demi Stokes and Jess Carter — are of Black or mixed heritage, and none are expected to start England’s quarterfinal against Spain in Brighton on Wednesday.

During the live English TV broadcast of England’s 8-0 Group A victory against Norway, presenter Eilidh Barbour highlighted the issue by saying, “All 11 starting players and five substitutes who came onto the pitch were white, and that does point towards a lack of diversity in the women’s game in England.” Barbour’s remarks led to a social media backlash, with high-profile commentators outside the game criticising both the presenter and the BBC for questioning Wiegman’s squad, but former England players — including Alex Scott and Anita Asante — both defended Barbour and supported the suggestion that England’s Euro 2022 squad does not reflect the demographics of the host nation.

“Budding Lionesses need role models to whom they can relate,” Asante, who made 71 appearances for England between 2004 and 2022, told the Guardian. “That is one of the many reasons why diversity is so important and why it is legitimate to question the England team’s whiteness.

“Young girls who cannot see anyone who looks like they do lack heroines to emulate — and that matters.”

Such a lack of diversity hasn’t always been an issue within the England women’s team. Scott won 140 caps between 2004 and 2017, while Rachel Yankey won 129 caps between 1997 and 2013. Eni Aluko and former England head coach Hope Powell both sit in the top 10 list of England’s all-time leading goal scorers. But the small number of leading Black or mixed heritage players in the Euro 2022 squad, and also in the Women’s Super League (WSL), is a situation that has been identified by the English Football Association, with a plan already in place to ensure that future England teams are more representative of the broader society.

“I absolutely can understand Anita [Asante’s] point of view,” Kay Cossington, the English FA’s head of women’s technical development, told ESPN. “That’s why it is really important that we share the work we are doing to try to find solutions.

“We acknowledge it won’t happen overnight — we are not going to find senior players overnight to change that — but what we can do is ensure that, in the future, we do everything possible to try and diversify our youth development teams going into our seniors of the future.”

It is a complex problem, however, and an unfortunate consequence of the professionalisation of the women’s game and growth of the WSL since its formation in 2010. The Professional Footballers’ Association (PFA) has also identified this fault-line, recently setting up the “See It, Achieve It” campaign to counter the absence of visible role models from ethnically diverse backgrounds. The PFA initiative is being led by former England international Fern Whelan, the organisation’s women’s football equality, diversity and inclusion executive.

“We don’t want any young girls to feel the game isn’t for them,” Whelan said. “The aim of the campaign is to inspire the next generation of young players coming through so they can see players in those positions and feel it’s a target they can achieve.”

From being a sport that grew organically within local communities in England and had a pathway to local teams — England’s all-time leading appearance holder, Fara Williams, was famously spotted playing in a ball court in Battersea, London — the women’s game has become detached from its working-class, “everyone’s welcome” origins and, at times, accessible only to those young girls with the family network and financial means to be able to do so.

Steffi Jones and Julie Foudy react to the Euro 22 quarterfinal brackets after Germany’s 3-0 win over Finland.

“We have all seen an incredible growth of the game over the past decade and that’s probably a reflection of what we see today, where our women’s teams are at with both club and country,” Cossington said. “The girls’ Centres of Excellence were created back in 1998 and there were many of them across the country, but when the league and clubs turned professional, there was an appetite to try to professionalise the Academy system and the youth development system within the clubs.

“With that came a commitment — girls were expected to train three times a week in Academies and then play games at the weekend — but all of a sudden, that provided a challenge for some players who couldn’t access that. Also, in an attempt to upgrade the level of their facilities, clubs took themselves out of more urban, inner-city areas, where most women’s clubs were formed and based, to the leafier suburbs, which again provided a challenge for young girls to actually access those facilities.

“Girls still have to pay to play in the Academy system, but boys are actually paid to do so, and they’re often ferried to and from training by the clubs. There isn’t the resource in the women’s game to do that.

“So a combination of events have led us to where we are now. It’s not the fault of any individual, but we have acknowledged it and we are absolutely working really hard with clubs to try to help them deliver a diverse playing pool and talent pipeline in the Academy system that can fill their senior team and provide players for the England team.”

The detachment of WSL clubs and their facilities from cities has arguably impacted young girls from the traditional hotbeds for sporting talent being able to progress in the game due to the inaccessibility/logistics, the cost or other factors denying them the ability to commit to the Academy system. As a result, the FA set up the Discover My Talent programme in 2021, a referral system that can create a pathway for any girl who is perceived to have that talent.

Emma Hayes and Danielle Slaton react to Sweden and the Netherlands reaching the Euro 22 quarterfinals.

There is also a partnership with the English Football League (EFL) Trust, which works with 34 Community Trusts in the country, and a link-up with the Premier League to create 70 Emerging Talent Centres from next season. In addition, there are “Wildcats centres” across the country, for girls between 5-11 to take their first steps in the game. All of the above are geographically spread throughout England, accessible in areas that had become disenfranchised.

“What this means is that young girls are able to stay in their own community, in an environment that works for them, giving them the competitive balance that they need and also enabling them to access a talent pathway into the clubs and England talent pathway too,” Cossington said. “We are trying to tackle every community. That’s different races and religions, but also different social demographics, too — people who live in more urban areas who may not have the infrastructure or parental support or money.

“This is still a challenge in the women’s game. And while parents may be happy to allow a 12-13 year-old boy to take public transport to get to training at an Academy, it would be a parental decision as to whether you would be comfortable with 12-13 year-old girl taking the same journey.”

Since its launch in April 2021, the Discover My Talent programme has delivered impressive results that the FA hope will turn the tide back towards greater diversity at every level of the women’s game.

“In one year of running Discover My Talent, we have had 1,666 referrals that weren’t in our system already, which is much more than we would ever have expected,” Cossington said. “From that number, 204 of those players have been referred onto our talent pathway. They are big numbers.”

According to FA data, nearly one-third of players referred were from London and the south-east region, with a quarter coming from the north-east, which includes Newcastle, Sunderland and Middlesbrough. The north-east and north-west — which includes Manchester and Liverpool — had the highest number of players from the most deprived areas. But having fixed the supply line of talent from areas where the game had lost touch, Cossington says that the challenge now is to ensure that those players progress within the system.

#Lionesses captain Leah Williamson believes the FA are on the right path to increasing diversity and accessibility in the game. pic.twitter.com/s3CdATuSvh

“The key to it now is how we can work with local organisations, local community clubs, to tap into funding, transport support or whatever it may be to help those girls stay in the game and cement themselves within it,” Cossington said.

“We don’t want to find them and they then fall out again: how can we best help them? That’s where the EFL Trust comes in, because those coaches are in the heart of those communities. They understand the communities, they have coaches who look like, and represent, those communities and that’s really important because it’s much better than having somebody they don’t know simply turn up with an FA badge on their top.

England’s progress so far at Euro 2022 is unquestionably generating huge interest and inspiring potential new talent, but the women’s game does lack role models such as Marcus Rashford, Raheem Sterling and Bukayo Saka who have become such prominent figures in the men’s game. But there is hope that the seeds of change will soon bear fruit.

“It’s definitely something that’s a priority [for the FA], and there are things in place now,” said England captain Leah Williamson in Tuesday’s pre-match conference. “This tournament’s going to do such a good job in inspiring so many, and nobody should be denied the opportunity to then be involved. I think that’s really important, it’ something we feel passionate about and luckily so do the FA. So yeah, it’s on the agenda, it is a priority and it’s something we hope to see the effects of in the future.”