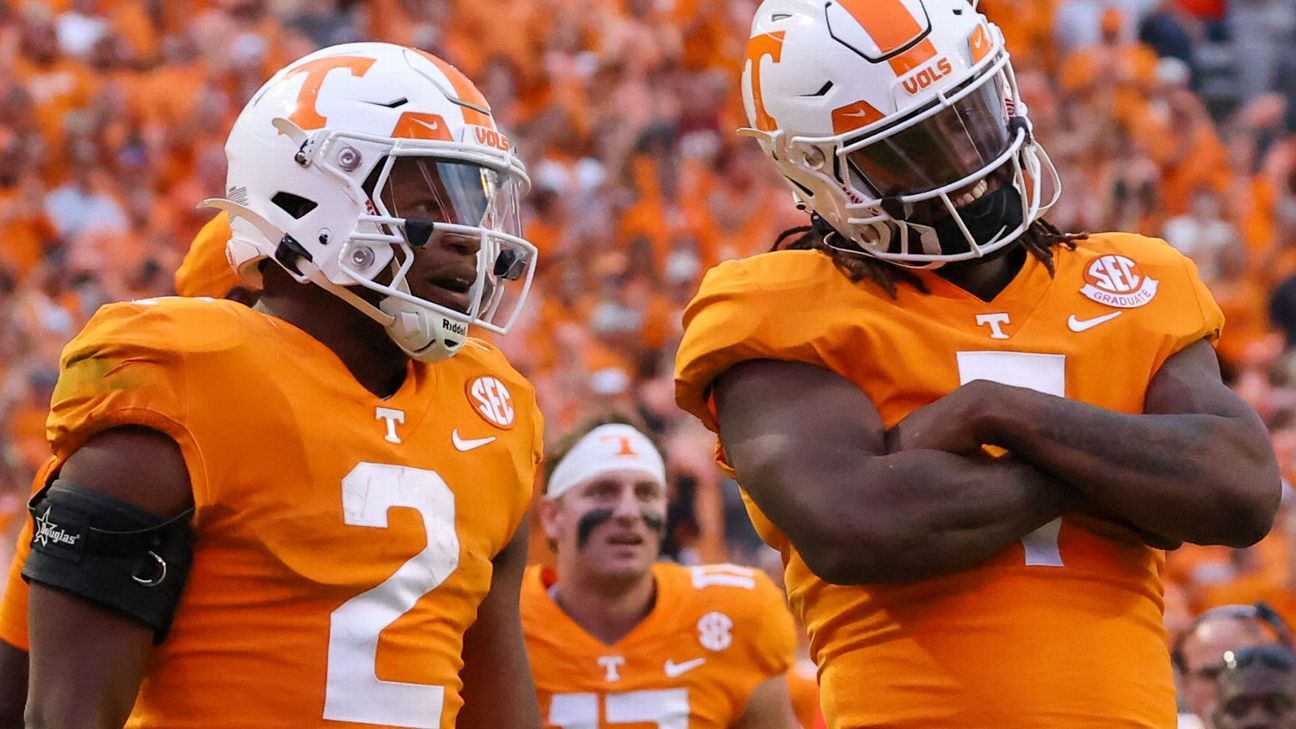 GRAPEVINE, Texas — The College Football Playoff selection committee rewarded undefeated Tennessee with the top spot in its first rankings of the 2022 season, marking the first time in school history the Volunteers entered the top four.

Now that the first of six rankings to determine this year’s four-team playoff have been released, let’s look at some broad takeaways, who should be mad, who would win if these four teams made it to the CFP and how a 12-team bracket would look.

Georgia needs to win more than the Vols do on Saturday

Kearis Jackson and defending champion Georgia are off and running this season, but they face a huge test against Tennessee on Saturday. James Gilbert/Getty Images

Tennessee is at the top of the college football world.

It has the best résumé in the country and the best win — against Alabama. If Tennessee loses to Georgia on Saturday, it’s possible the Vols still finish the season 11-1 with a win against the SEC champions, should Alabama run the table.

If Tennessee wins on Saturday, it could lose to Alabama in the SEC championship game and still finish in the top four, having split with the Crimson Tide and finished as the league’s runner-up.

Georgia appears to have less margin for error, even at No. 3. (Though the No. 3 spot is the unofficial CFP jinx, as only one team ranked No. 3 in the initial rankings — Clemson in 2020 — has made the playoff.)

If Georgia loses on Saturday and doesn’t win the SEC East, it will need to hope desperately that it can finish in the top four without winning its division. Right now, it’s clinging to the lopsided season-opening victory against Oregon to boost its résumé. Without that, Georgia’s opponents are currently 22-26, with the best win against three-loss South Carolina. Without a victory against Tennessee, Georgia would need to hope wins against remaining opponents Mississippi State, Kentucky and Georgia Tech can help compensate for no division title, and none of those teams is currently in the CFP top 25.

Michigan’s nonconference schedule is holding it back

Blake Corum and the Wolverines started the year with wins over Colorado State, Hawai’i and UConn. AP Photo/Paul Sancya

With Tennessee and Georgia playing each other on Saturday, there’s obviously going to be some room in the top four if Georgia loses and falls out; but if Georgia wins, you could still be looking at two SEC teams in the top four. That’s not ideal for a Michigan team sitting on the bubble behind an undefeated Clemson squad rolling toward an ACC title.

Without a win against the Buckeyes, it’s going to be hard for the committee to justify moving Michigan up. The Wolverines’ nonconference schedule (Colorado State, Hawai’i and UConn) was abysmal, and right now, their only win against a CFP top 25 team is No. 15 Penn State (though they get a shot at No. 16 Illinois this month). The same can be said for Ohio State as far as the Buckeyes’ best win, but clearly the committee likes what it sees on film from Ohio State more than that of Michigan.

Despite opening the season with a 49-3 loss to defending national champion Georgia, Oregon is eighth in the first College Football Playoff ranking. Photo by Thearon W. Henderson/Getty Images

The Pac-12 hasn’t had a team reach the CFP since Washington in 2016, but with No. 8 Oregon and No. 9 USC both ranked in the top 10, it’s possible the league can snap its drought.

Considering Tennessee and Georgia still have to play each other and that Michigan and Ohio State will meet, there will be movement above them. It’s also possible Alabama and Clemson lose between now and Selection Day, as Alabama has two tough trips to LSU and Ole Miss looming, and Clemson is at Notre Dame on Saturday and still has to face rival South Carolina before the ACC championship game.

The Pac-12 would be helped if TCU loses, which is possible because the Horned Frogs have to win on the road against both Baylor and No. 24 Texas. Oregon has some major opportunities to impress the selection committee, which ranked Utah No. 14 and Oregon State No. 23, opponents the Ducks still have to face during the regular season. It’s also possible that USC and Oregon face each other in the conference championship game, almost guaranteeing them both another ranked opponent. Oregon has to overcome its bad loss against Georgia, though; the 49-3 defeat would be by far the largest for a team making the CFP.

No. 12 UCLA isn’t out of the mix with one loss, either. In 2014, Ohio State was No. 16 in the CFP’s initial ranking — and it went on to win the national title. No team has started out lower than that.

TCU and the Big 12 should be concerned

Even with its 8-0 record, TCU is seventh in the first College Football Playoff ranking, behind one-loss Alabama and despite having a better strength of record and schedule than Clemson and Michigan. Ben Queen/USA TODAY Sports

The undefeated Frogs are behind one-loss Alabama. And they arguably have a better résumé than the Tide. That seems to suggest TCU needs to finish as an undefeated conference champion in order to have a shot. The Frogs’ best wins are against No. 13 Kansas State and No. 18 Oklahoma State. — Heather Dinich

It’s outrage season in college football, and with Tuesday’s release of the first 2022 CFP rankings, there’s plenty of anger to go around.

1. TCU (8-0), ranked seventh: Yes, we know the argument. TCU just hasn’t been dominant. It’s a case that might hold water if dominance was the criteria for the teams just ahead of the Horned Frogs.

TCU has had eight second-half drives this season when trailing. That’s actually one fewer than No. 4 Clemson.

TCU has three wins by seven points or fewer, but the team one spot ahead — Alabama — has two, and a loss.

TCU hasn’t proved enough to overcome some of the obvious drawbacks. But hey, Michigan’s seven-point win over Maryland — the Wolverines’ second-best opponent this year — must’ve really impressed the committee.

The folks in the committee room claim to care only about résumé — who have you beaten? — and don’t look ahead or consider past seasons. So how then to make heads or tails of TCU’s No. 7 placement?

ESPN’s college football crew discusses the rankings reveal for the Top 6 of the College Football Playoff.

The Horned Frogs have four wins over teams that were ranked. That’s the same as Michigan, Georgia and Alabama combined.

The Horned Frogs have run 20 offensive plays in the fourth quarter when trailing. That’s just three more than Georgia, and they all came against better opposition than Missouri.

The Horned Frogs are No. 3 in ESPN’s strength of record, which measures the odds an average top-25 team would have the same record vs. the same schedule. That’s ahead of No. 5 Georgia, No. 6 Alabama and No. 7 Michigan.

But there’s a bigger debate here on how schedule difficulty should be considered. Yes, Tennessee and Georgia have marquee wins, and there’s a reasonable chance TCU would’ve lost had it played Oregon or Alabama. But is it tougher to play a schedule that includes one incredibly difficult opponent and a bunch of cupcakes (as Georgia has) or to go a full month playing decent (if not elite) top-25 teams (as TCU has)?

The argument for TCU is strong — stronger too because the committee seemed to indicate a belief in the quality of the Big 12 with the rest of its rankings. (Kansas State and Texas fared better in the CFP ranking than in the polls.) So it’s unfortunate that confidence wasn’t extended to the Horned Frogs. Because while the opening rankings don’t often mean much in the big picture, they do set the stage. And as it stands, TCU has done as much as anyone save Tennessee, and it’s still not good enough to eclipse even a one-loss Alabama.

For Tennessee, Georgia, Michigan, Alabama and Ohio State, the season will determine who ends up in the top four — starting with this week’s games for those SEC schools. But for TCU, these rankings suggest it’s not just about winning. The Horned Frogs need to win bigger, win better and still hope the teams ranked higher will falter enough to convince the committee to change its perceptions.

2. UCLA (7-1), ranked 12th: How are the Bruins behind USC? The Trojans have played two decent teams: Utah and Oregon State. They nearly lost to the Beavers, and they did lose to the Utes. But UCLA? The Bruins’ lone loss came to a top-10 foe (Oregon), and they beat Utah.

3. Tulane (7-1), ranked 19th: The good news is Tulane is the top-ranked Group of 5 team. The bad news is the Green Wave are ranked six spots behind Kansas State, which has two losses, including one to … Tulane!

4. Michigan (8-0), ranked fifth: The Wolverines’ weak nonconference schedule is their undoing. It’s interesting this comes after canceling a nonconference series with UCLA, so Jim Harbaugh can now pass NC State’s Dave Doeren on the “we’re really angry about a canceled game against the Bruins” power rankings.

5. Florida State (5-3), unranked: How did Texas get ranked at 5-3 but Florida State did not? The Longhorns lost three close games — to Alabama, Texas Tech and Oklahoma State. So too have the Seminoles — to three ranked teams in Clemson, Wake Forest and NC State. But while Texas’ best win is against an average-at-best Oklahoma, FSU has a win over No. 10 LSU. Is a one-point loss to Alabama better than a one-point win over LSU? — David Hale

Caesars Sportsbook updated its national championship odds on Tuesday, and No. 1 Tennessee is now +1000 to win the title after starting the season at +10000. Ohio State is the betting favorite at +190, followed by Georgia (+200) and Alabama (+375). Here’s how ESPN’s writers see the semifinals going under the current ranking.

How a 12-team playoff would look

Everyone with the power to expand the College Football Playoff wants the field to grow to 12 teams in time for the 2024 season.

But currently, expansion is scheduled to begin in 2026. So while discussions continue on how to move up the timeline, we’re taking a look at how a 12-team playoff would look today based on the already-determined model released by the commissioners and presidents.

Here’s what the playoff would look like if the 12-team format were in place today: