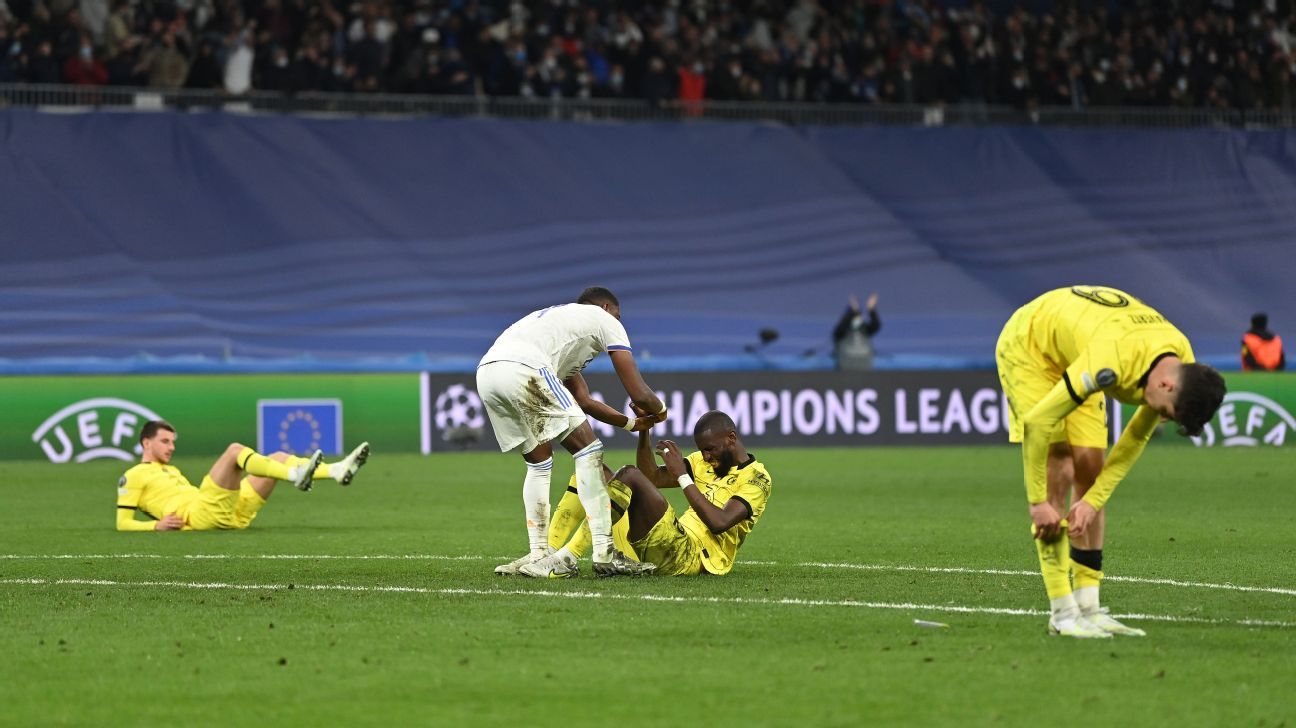 MADRID — There is no preferred way to surrender your Champions League crown, but nothing could come much closer than this.

Asked on the eve of Tuesday’s game how champions bow out of a competition if it has to be their time, Chelsea head coach Thomas Tuchel replied: “By not accepting it before it ends. By leaving everything on the pitch that we have and by showing we can work harder, play better, that we know we can take more risks and that we show our true face and live up to our full potential.”

They did just that. The Blues’ title defence ended at the quarterfinal stage, forcing extra-time here in the Bernabeu Stadium and winning 3-2 on the night but losing 5-4 on aggregate.

Chelsea indeed lived up to their full potential and showed precisely what they are: Herculean in spirit, heroically defiant in the face of adversity, cleverly deployed by one of the game’s elite coaches but ultimately flawed in the final third.

The difference across the 210 minutes was finishing. Karim Benzema’s 96th-minute header was the final goal in an enthralling, breathless night here at Estadio Santiago Bernabeu, his fourth of Real’s five across the tie. The 34-year-old hit the crossbar with an earlier effort and just four shots all night, yet he was on hand to deliver what proved to be the knockout blow. His individual xG was 0.58, lower than Kai Havertz (0.77) and Christian Pulisic, who only played the final 37 minutes but missed two glorious chances to explain his xG of 0.61.

Benzema’s clinical touch and a truly magnificent assist from Luka Modric were the moments of efficiency Chelsea lacked.

“We are very disappointed and very proud at the same time,” said Tuchel. “We got beaten by pure individual quality and offensive conversion after our mistakes.

“They did not create a lot at Stamford Bridge, but they took every half chance and converted it. This was enough. You have to reduce your amount of mistakes, and we could not reduce it to an absolute minimum over the two legs.

“I think we deserved to go through. We were unlucky, but there are no regrets. These are the kind of defeats you can take with pride and accept as a sportsman.”

– The battle for Chelsea: Acrimony, anger and dirty tricks
– Don’t have ESPN? Get instant access

Chelsea amassed 28 shots on the night, earning a 3-0 lead at one stage as they pinned Real back in their own half with a mixture of intelligent pressing, midfield control and tireless mental fortitude. There was an element of luck about Mason Mount’s opener as Timo Werner appeared not to entirely mean the improvised pass into his path, but the England international showed superb composure to slot a finish past Real goalkeeper Thibaut Courtois.

The 1,000 or so Chelsea fans tucked away in the mid-renovation rafters of this iconic stadium sensed the comeback was on.

Antonio Rudiger headed Mount’s 51st-minute corner into the net to haul Chelsea level on aggregate, and when Marcos Alonso thrashed a shot past Courtois just after the hour mark, they were ahead in the tie. Yet VAR ruled out Alonso’s effort for an unfortunate but perceptible handball and Chelsea’s progress was briefly checked. Benzema struck the crossbar but still Chelsea came forward.

Mateo Kovacic slipped a 75th-minute pass through for Werner, who cut inside on his right foot and steered a shot Courtois could only divert into the far corner. Real had been curiously passive to that point, seemingly unable to shift gears after trying to contain Chelsea for long periods but Modric conjured a pass out of thin air to resurrect their hopes.

Lifting the ball over Thiago Silva with the outside of his right foot, Modric’s pass fell perfectly for Rodrygo to steer a smart finish past Edouard Mendy and set up extra-time, although not before two Pulisic misses from close range, the second looked worse with each replay as he hooked the ball over the crossbar.

Thomas Tuchel exits the Champions League quarterfinal round with reasons for regret and reasons for pride after Chelsea fought back in Madrid. David Ramos/Getty Images

Tuchel had warned in the build-up that Real had a physical advantage owing to LaLiga’s use of five substitutions compared with the Premier League’s three, and perhaps that contributed to one or two tired passes creeping into their play. Chelsea lost the ball cheaply, and suddenly Vinicius Junior was in space on the left, checking back before finding a cross for Benzema to convert in a goal that bore more than a passing resemblance to the opener in the first leg.

Dan Thomas is joined by Craig Burley, Shaka Hislop and others to bring you the latest highlights and debate the biggest storylines. Stream on ESPN+ (U.S. only).

Hakim Ziyech had a shot beaten away by Courtois at the near post before Havertz headed wide when unmarked in the box. Jorginho dragged another effort off target in a frantic finale which left Tuchel directing his frustration in all directions including Polish referee Szymon Marciniak for “laughing and smiling” with Real boss Carlo Ancelotti at full time.

Tuchel also suggested officials lack “courage” to give big decisions, something he could not level at his players after a performance all the more resilient given the wider context of uncertainty over Chelsea’s ownership following the sanctioning of Roman Abramovich by the U.K. government and subsequent effectively forced sale.

The four bidders left in the running got a perfect distillation of what they are buying: a highly competitive unit that knows how to compete for trophies. But they could also see it is one that needs investment if Chelsea are to continue to fight like this.

Next post Still got it! Ancelotti is first coach to reach UCL