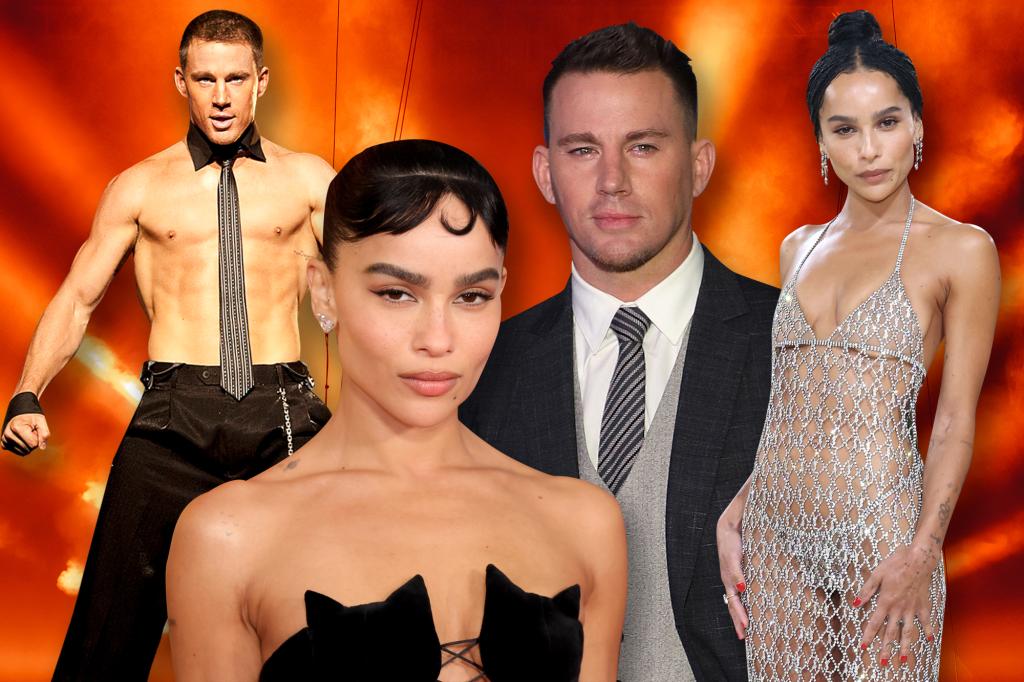 Channing Tatum, the ever handsome and charming superstar, is here to get you hot, bothered and sweaty (AKA: really, really wet).

Known for his iconic role in “Magic Mike,” the actor, 41, will be showing that the third time around, he still has the smile, bod and abs that sent the whole world into a tizzy since he first hit the mainstream.

Yet, with even more blockbusters under his belt and a thriving romance with “The Batman” Catwoman, Zoë Kravitz, 33, Tatum looks like he’s still on the rise. So who is he underneath all of that sex appeal, humor and mystery? Was he born for the Hollywood and celebrity life or did he just buckle down to charge onward until he had built it for himself?

Do Tatum and Kravitz have cosmic love on their side for the long-term and what lies ahead for them? Take a deep dive into their stars with me because I’m a pop culture astrologer and I can see it all. 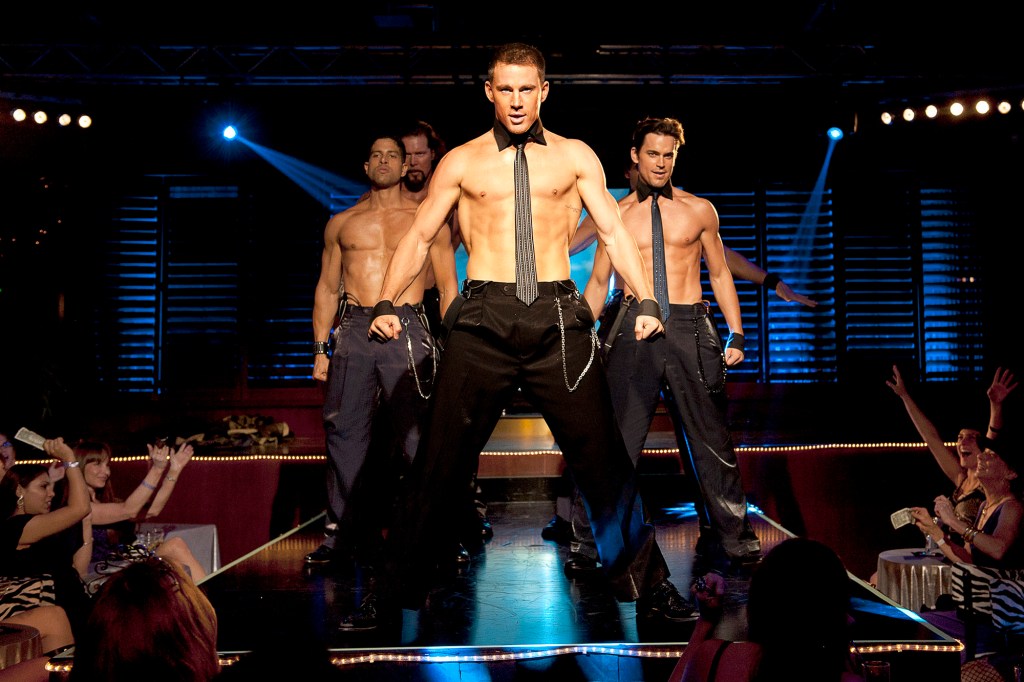 Channing Tatum is a Taurus Sun and his natal chat shows how he’s packing meat… or heat.Claudette Barius

Channing Tatum was born on April 26, 1980. This makes him a strong Taurus Sun with a devoted Virgo Moon. His birth time has not been confirmed anywhere online, but I do know Mr. Tatum likes astrology (we previously were in the same article about our love for astrology and we’d get along like two peas in a pod), so I feel highly confident our paths will cross. Until then, let’s focus on what we do know is exact in his birth chart. When it comes to elements in his chart, he is highly composed of Earth energy, with a secondary to Fire. He is a go-getter, he knows he can manifest the things he wants and he has both the perseverance and the passion to create his world as he pleases.

First and foremost, his natal chart speaks of how exhilarating and magnetic he is, with Venus, the planet of beauty and attraction, strongly emphasized by his inherent astrological aspects. His Mercury, ruling his mind, syncs with Venus, making him friendly, sociable and downright handsome AF—both in how he communicates as well as presents himself. He’s also softly persuasive no matter what he’s after, so that coy smile he has, yup—that’s just a part of the authentic Tatum package.

His Venus dances with Pluto, the planet of intensity, which brings him tremendous charisma and a profoundly captivating presence where he always—literally always—leaves a deep and memorable effect on people. His Venus also stands opposite his Neptune, the planet of imagination, bringing him a generous, kind and truly compassionate nature, as well.

Other birth chart aspects show his high-sense of confidence and sex appeal, bringing him a daring edge to put himself out there and strut that ‘Magic Mike’ sex bomb attitude—particularly with his Mars, the planet of sex, united with Jupiter, the planet of luck, as well as his Moon smiling upon Uranus. The larger than life vibe he exudes also is revealed by how his Sun, ruling his life force, holds hands with Jupiter, further bringing luck and fortune down upon him any time he asserts himself as a leader. 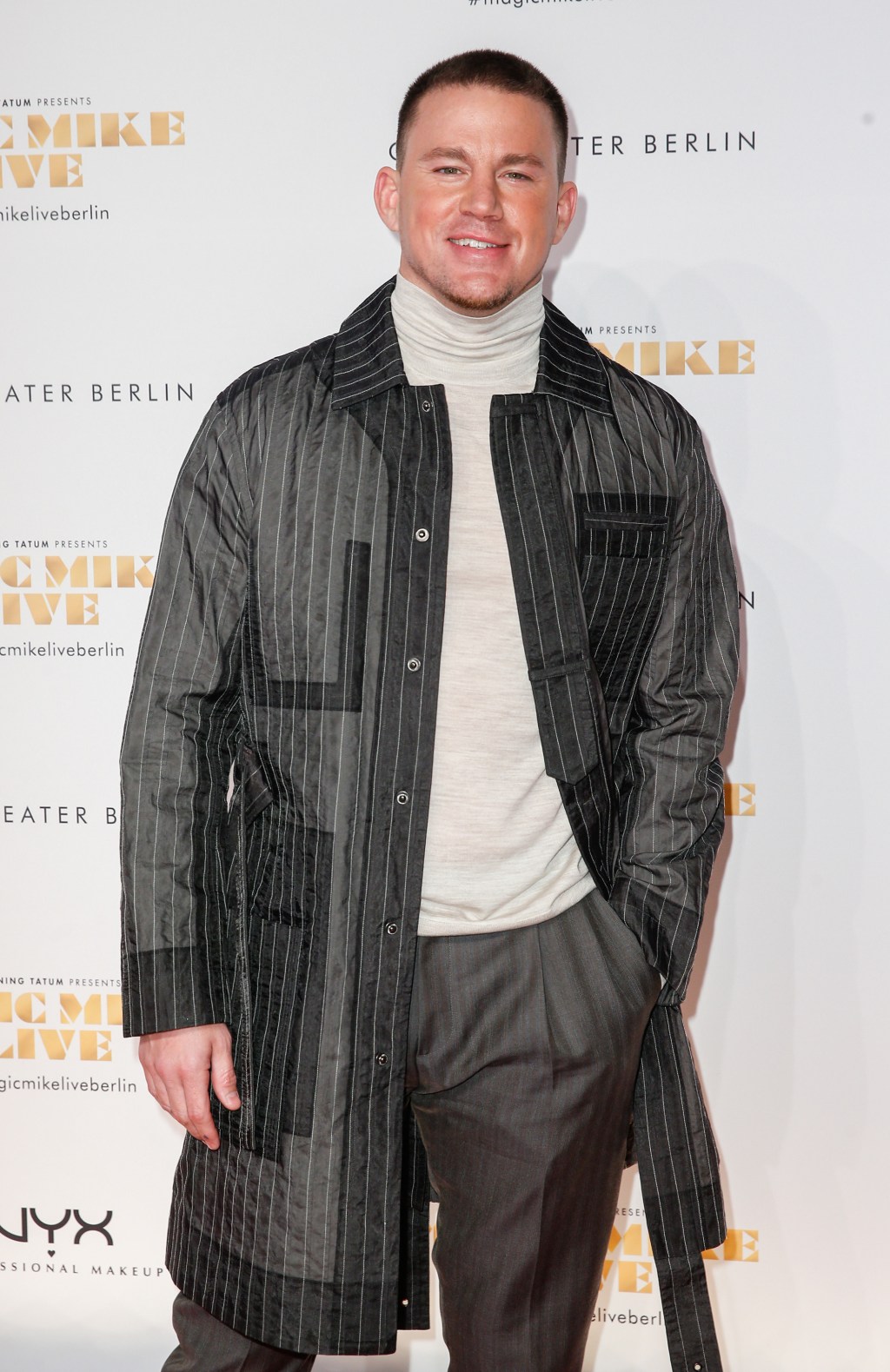 Channing Tatum has a sensitive side, as can be seen from his birth chart.

While all of this is obvious to any Tatum fan, there’s something much deeper written between the lines of his natal chart that surprised me—and some of the previously mentioned planetary interactions also act as a double-edged sword. You see, Tatum is certainly a gentleman and totally husband material. He’s actually deeply sensitive underneath it all, yet, unfortunately there’s strong insecurity around relationships and love that he has faced, too.

This hot and cold, confusing up and down energy that he experiences around intimacy is also where he tries to find his strength. Venus clashes with Saturn, the planet of challenges, in his chart, showing that he experienced coldness from others early in life and that created deep pain that he is still working through. There are also deep fears of rejection that exist with him and at times he tries to distance himself from his heart and his emotions when it gets too tough—most notably with his Moon, mirroring his soul, clashing with his Venus and also conjunct Saturn.

This shows that he continuously has had to face sadness around personal relationships—and then when they go astray, he finds himself as if consumed beneath a dark cloud, locked in isolation, and he doesn’t know how to break out of it. None of this is because he’s difficult, it’s that he tends to give so much and then find himself shattered, taken advantage of and uncertain how to open himself up once again. Tatum, who previously had a divorce with Jenna Dewan and a whirlwind relationship with the ever-fabulous and talented Jessie J, likely felt these kinds of feelings deeply from those experiences. 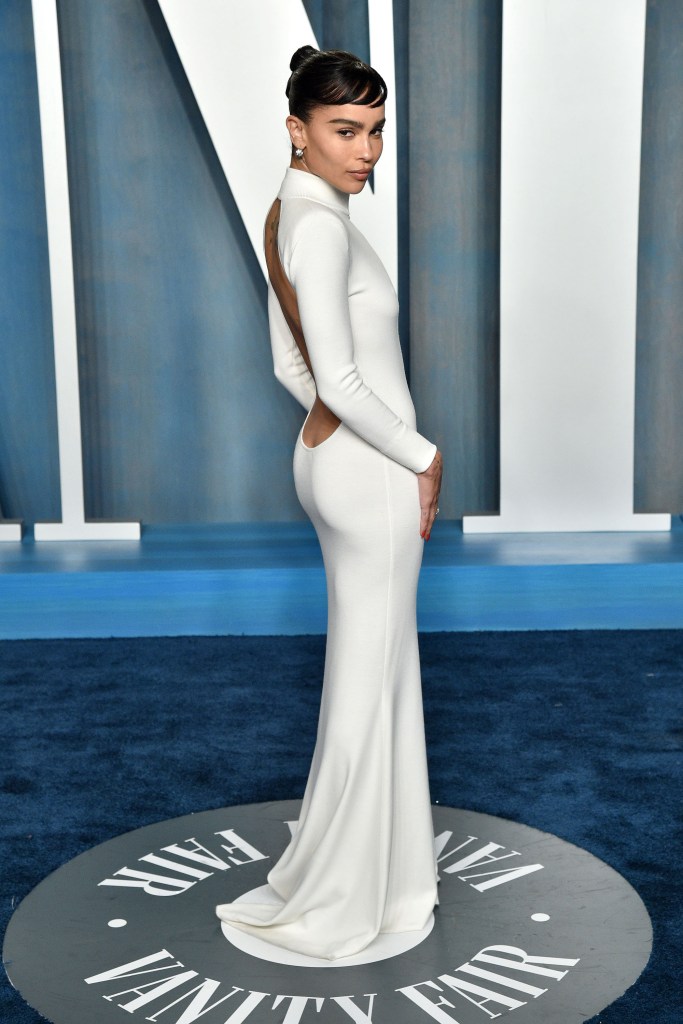 Zoë Kravitz was born on December 1, 1988. This makes her a fiery Sagittarius Sun with a practical Virgo Moon. Her birth time is listed online, revealing she’s a Libra Ascendant. She, just like Tatum, is very significantly composed of Earth and Fire elemental energy—and this reveals right off the bat that they both vibe well because they are inherently passionate and adventurous people, but also value their integrity and like to make things happen. They both will show up, repeatedly, every day if they agree to. When they set their minds upon something, they will uphold that plan and agreement.

There are a few themes that rise up for Kravitz’s birth chart, and to be honest, I think she’s brilliant. She’s logical, quick-witted, direct and to the point. I adore how her Sun, ruling her life force, is in an exact conjunction with Mercury, the planet of communication. To say that she can bring an intellectual and inspirational approach to all that she does is entirely accurate. This is further empowered by how Mercury smiles upon her Ascendant, which is how she presents herself to the world.

Her Sun and Moon also make a remarkable amount of conversations with the other planets, too, helping to bring her a true, innate sense of balance in her life. Even though her Sun and Moon are in a sharp angle to each other, which shows that she can be immensely strong-willed, she understands that struggle is a part of life and in order to get what you want, you have to push yourself out of your comfort zone and use that energy as a catalyst.

Her Sun links with Mars, bringing her even more confidence and charisma, while her Moon dances with Mercury, Venus, Neptune, Pluto and her Midheaven—or her highest point in her career. She uses her emotions and sensitivity in constructive, profound and cheerful ways—which ultimately shows that she is a good person, plain and simple. TBH: I’m putting on my vision board that before the year is out, she is gonna be my new BFF. 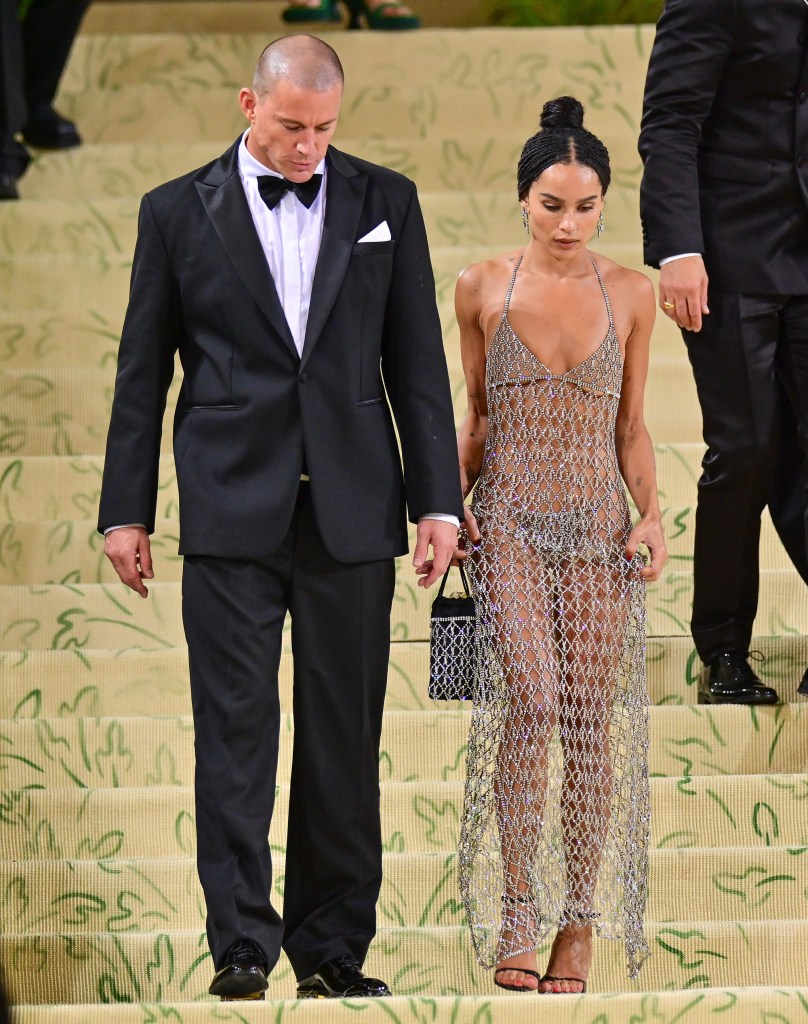 Step right up to the Court of Kyle Thomas, and I shall peer into your union. Okay, all grandiose speech aside, these two are such a lovely match. My compatibility rating for them is 8 out of 10.

First off, let me get the elephant out of the room: the vast majority of the time a Taurus, which is Tatum, and a Sagittarius, which is Kravitz, have a very difficult time lasting forever. But *drum roll, please* real astrological compatibility isn’t just based on Sun signs—it’s how the full picture of two people’s charts overlay to create something altogether new. Next up, which is actually immensely beneficial, though, is that they both share a Virgo Moon sign. This means that no matter what, at the end of the day, they can find a way to relate to one another because they very often are on the same emotional wavelength.

Yes, there is plenty of sex, sweetness and magic between them. The rapport is warm and comfortable, rather than dramatic, toxic or overwhelmingly passionate. This is a connection that has a sense of balance and honesty between them that helps them support each other’s choices. With many of their outer planets, such as Jupiter, Saturn, Uranus and Neptune interplaying with one another’s inner planets, such as the Moon, Sun, Venus and Mars, we can see that this relationship works on many profound levels to help one another evolve and succeed.

However, the number one takeaway from their entire compatibility is that this relationship is karmic and very deeply healing for them both—but especially in the sense that I think Kravitz is actually healing Tatum on a multitude of levels. The wounds I had mentioned previously in Tatum’s chart seem to be softly and slowly fading with each day they spend together. Chiron, the asteroid known as “the Wounded Healer,” is heavily placed in both of their charts. This is the kind of relationship they both need—especially now with where they are upon their own respective paths. 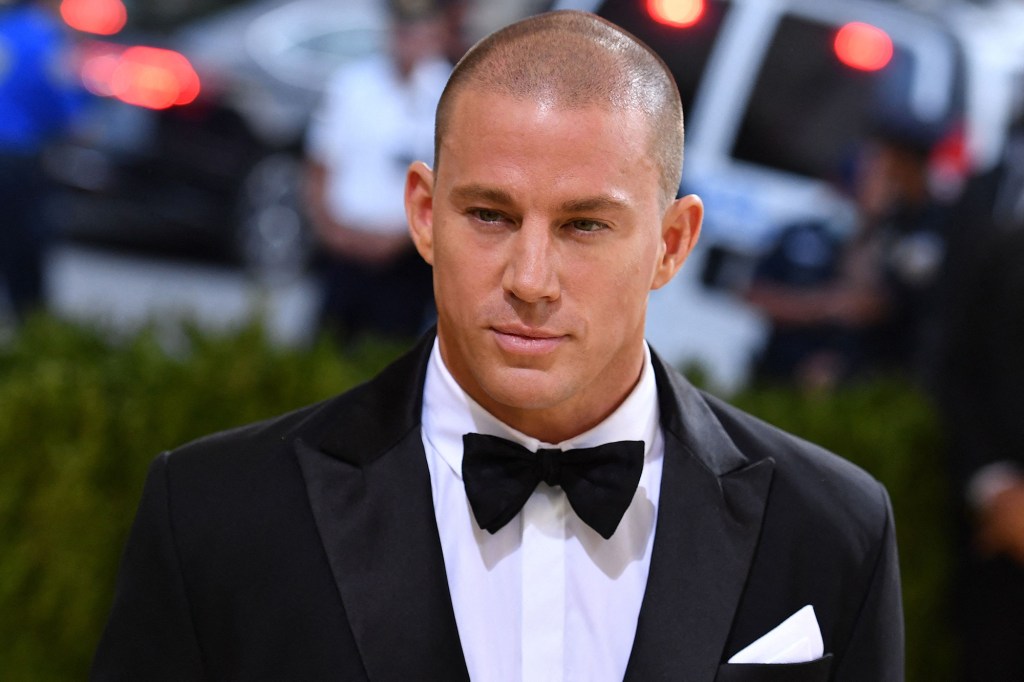 Channing Tatum is set to experience some powerful cosmic revelations.AFP via Getty Images

What are predictions for Channing Tatum?

Moving forward, what lies ahead for Mr. Tatum? Most notable to mention are the powerful eclipses that he is experiencing between 2021 and 2023. These are affecting his sense of power, as he recreates himself and leaves behind patterns, people and baggage that no longer serve him. He will transform the way he sees himself and the world—but especially around relationships.

With eclipses, representing destiny and fate, also causing mighty shifts in his partnerships, it is set in motion that any of the connections he is in that are positive will grow rapidly to the next level, such as moving in, getting engaged or even being wed. However, if he is not in the right connection, they will rapidly part ways. Yet, with Jupiter, the planet of miracles, dancing in his sector of privacy and healing, he will spend a lot of time in 2022 and the first five months of 2023 doing deep soul searching and releasing trauma, karma and pain that he is holding onto.

Luckily, when Jupiter enters his Sun sign in the spring of 2024, he will embark upon one of the happiest and most beautiful new periods of his life, as he dreams big once again about how high he can go and where he wishes to soar.  You heard it here first.