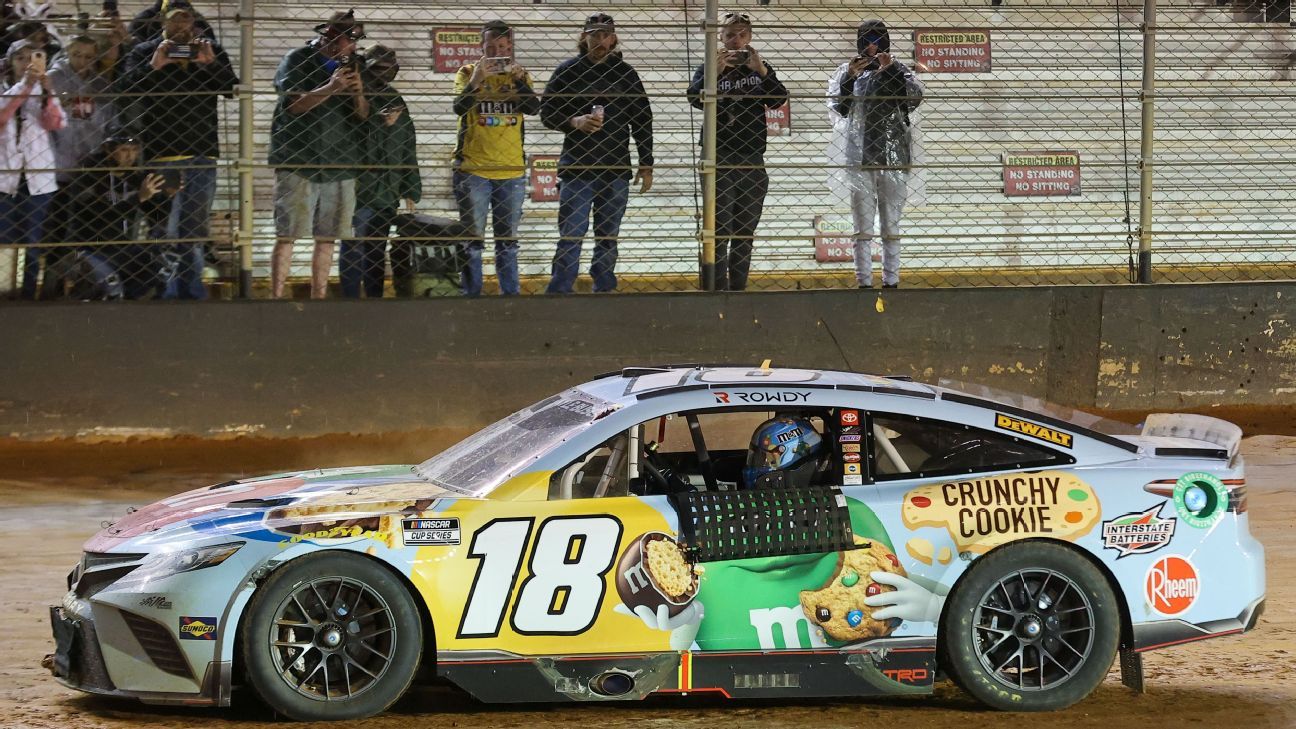 Reddick was chasing the first Cup win of his career, led 99 of the 250 laps and controlled the race from the final restart with 24 laps remaining. But lapped traffic allowed Briscoe to close in on Reddick and he timed his move for the win for the third turn, when Briscoe tried to slide his way past Reddick on the inside.

The move backfired and both cars spun out of control and Busch, who was running third, simply skirted through for his first win.

“We got one, you know?” Busch said. “It doesn’t matter how you get them, it’s all about getting them.”

Busch won for the ninth time in Cup at Bristol — first time in two dirt races — and was booed by the smattering of fans who waited out two rain delays that pushed the first race on Easter Sunday since 1989 to nearly four hours.

“I mean, man, I feel like Dale Earnhardt Sr. right now,” Busch said, referring to the 1999 race in which Earnhardt was booed for bumping Terry Labonte out of the way for the win. “This is awesome. I didn’t do anything.”

Reddick finished second and faulted himself for not holding off Briscoe. Briscoe went from two turns away from the win to 22nd and immediately found Reddick on pit road to apologize.

“I was going to spin out, I think, either way,” Briscoe said. “I’m sorry. I just wanted to let you know. I am sorry. I wish you would have won.”

Reddick was understanding and admitted he should have been more defensive.

“I don’t think I did everything right,” Reddick said. “Briscoe was able to run me back down there. I should have done a little bit better job of just, I don’t know, I shouldn’t have let him get that close. He ran me back down. Worked really hard to do that.

“I mean, you’re racing on dirt, going for the move on the final corner. It’s everything that as a driver you hope to battle for in his situation. Made it really exciting for the fans. I should have done a better job and pulled away so he wasn’t in range to try to make that move.”

Rain had stopped the race for a second time moments before the race was supposed to go green with 30 laps remaining.

“It’s slimy,” Busch, who was running second as the rain slicked the track, said of the conditions.

From inside his cockpit, Reddick knew he had his work cut out for him if he was to win.

“One of the best in stock car racing, Kyle Busch, he’s definitely going to make me earn it,” Reddick said from inside his Chevrolet.

But Briscoe got past Busch when the rain finally stopped and it was Briscoe who wrecked Reddick’s trip to victory lane.

The race was NASCAR’s second attempt at running a Cup race on dirt and it turned into a wet and muddy mystery when rain paused the racing and most of the drivers seemed clueless about the rules.

Bristol dumped more than 2,300 truckloads of Tennessee red clay onto its beloved concrete 0.533-mile bullring to help NASCAR add variety to the schedule at a time the stock car series is experimenting with radical changes. Fox Sports then convinced NASCAR to take the prime-time television slot on Easter Sunday, the first time since NASCAR’s 1949 inception the Cup Series deliberately chose the date.

NASCAR had held 10 previous Cup races on Easter Sunday in its history, but all because of weather-related rescheduling. This purposeful event was designed to dominate a television audience gathered together as a family the same way the NFL and NBA do on Thanksgiving and Christmas.

What the new audience saw was a mid-race mass of confusion because few drivers seemed to understand the rules during the first stoppage. Some drivers pitted — presumably because their teams knew scoring was halted under the red flag and wouldn’t resume until the race went green.

Busch was among many drivers who did not pit, perhaps because they assumed they’d move up in the running order. So it was Busch who had his car out front when NASCAR halted all activity, but Briscoe, who had pitted, was scored as the leader.

Denny Hamlin, who had already been eliminated from the race, was watching on Fox Sports and saw what he claimed was a rules explanation that lasted longer than a minute.

“What’s wrong with this picture,” Hamlin wrote on Twitter. “As a fan sitting on my ass right now watching, it’s hard to take this seriously.”

Carson Hocevar, the runner-up in Saturday night’s Truck Series race, posted a meme that intimated NASCAR was making up the rules as it went along. In actuality, NASCAR was clear in its pre-race rules video that scoring would be stopped at the end of the stage and not resume until the race went green again.

The confusion up and down pit road indicated few had a clear grasp of the procedures, which at Bristol differed from all other Cup races. NASCAR held a mandatory pre-race driver meeting prior to the pandemic in which rules were discussed; it has since been replaced by a video.

The race did resume — with Briscoe as the leader — with the entire third stage still remaining.