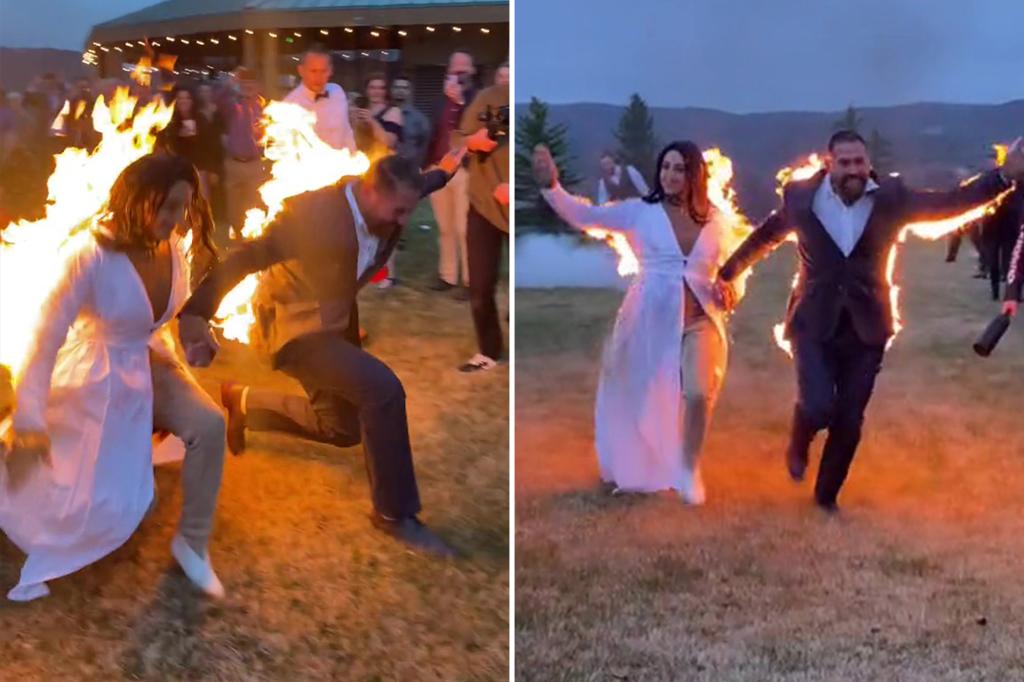 No rice-throwing for this couple: Pyromaniac newlyweds literally went out in a blaze of glory after setting themselves on fire to end their wedding ceremony. A video of the nuptial pyrotechnics currently boasts more than 15.2 million viral views online as of Friday afternoon.

The lovebirds are Gabe Jessop and Ambyr Mishelle, 42-year-old stunt doubles who work on TV and film sets such as “Yellowstone” and “Hereditary,” so they decided to pay homage to their shared careers during their wedding.

However, very little could prepare most viewers for the stunt, which features flames that practically evoked a gender-reveal party gone awry, Jam Press reported.

The video of the knot-frying ceremony — captioned “when stunt people marry” — starts off traditionally enough, with the bride and groom standing side by side. 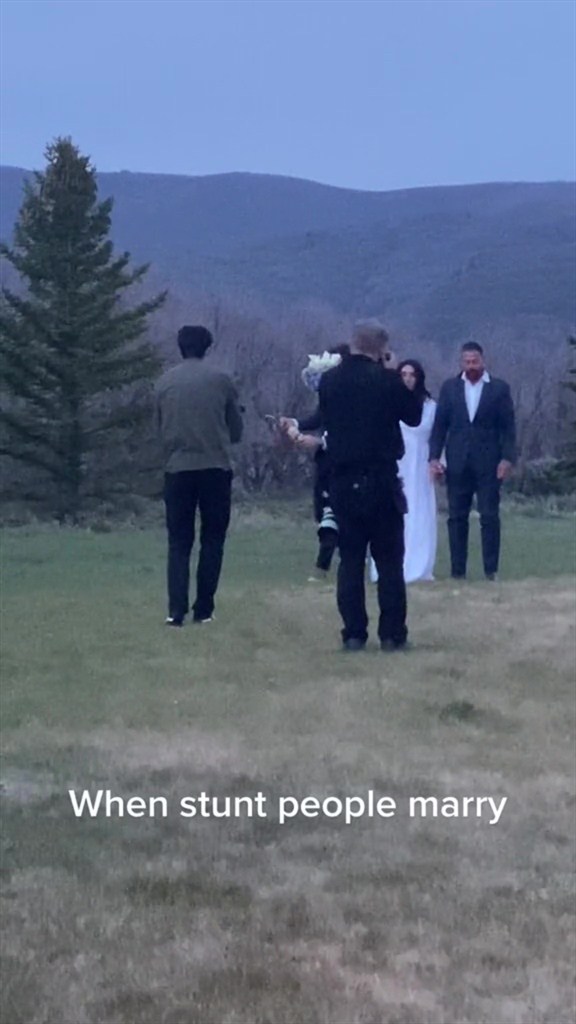 The clip of the fiery nuptials was captioned “when stunt people marry.”Jam Press Vid/@djrusspowell 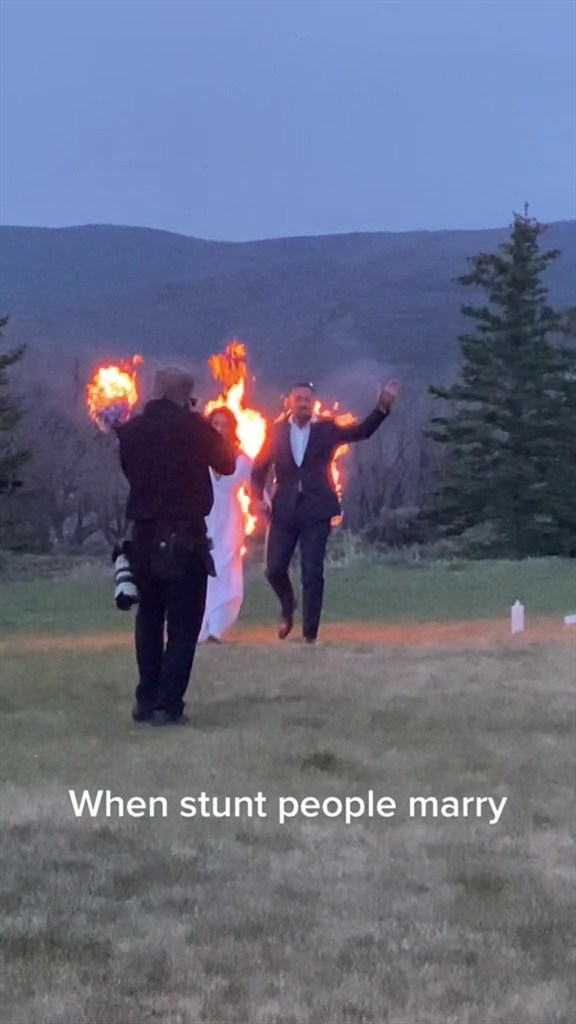 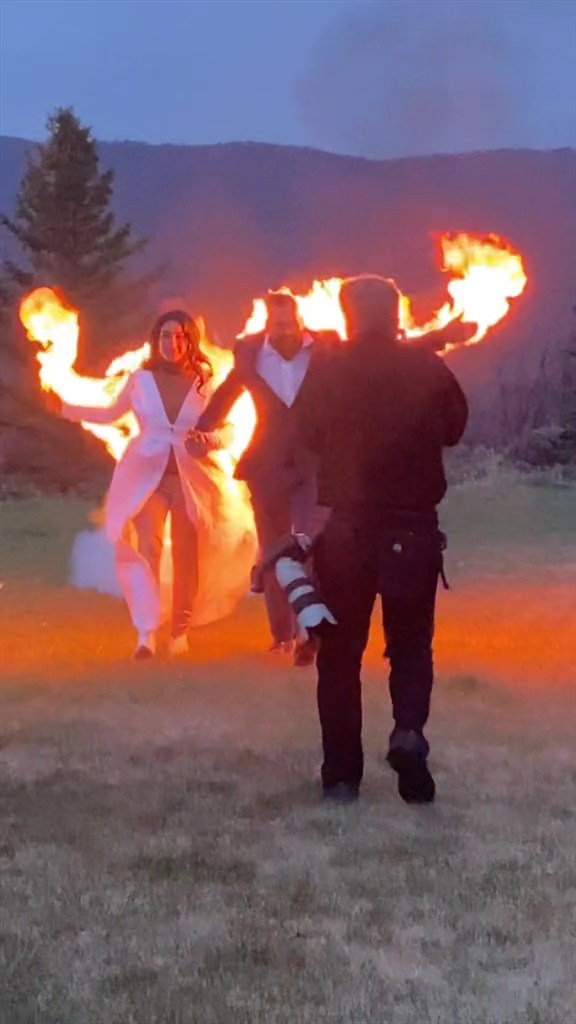 This is not what Alicia Keys meant when she sang “This Girl Is On Fire.”Jam Press Vid/@djrusspowell

However, the event takes a smoldering turn after a man ignites Mishelle’s bouquet with a large incendiary device, whereupon they go up in blazes a la Nic Cage and Sam Elliott in “Ghost Rider.”

The twin flames then jog down the aisle holding hands while guests cheer in the background, seemingly unbothered by the fact they’re both on fire.

The fiery footage ends with Jessop and Mishelle kneeling as a wedding attendant douses the hot action with a fire extinguisher. 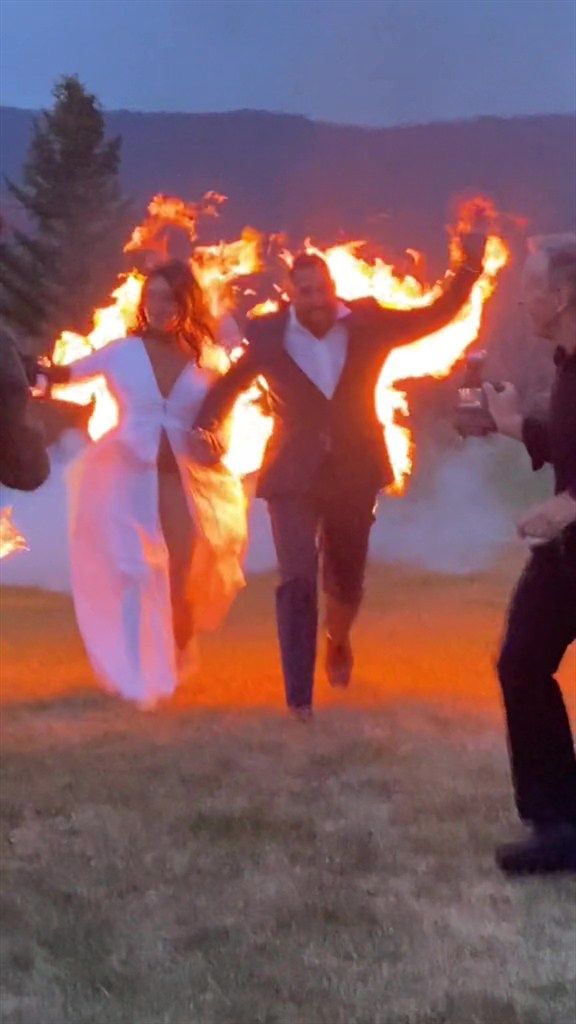 The couple was protected by fireproof clothing as well as anti-singe gel on their exposed skin and hair.Jam Press Vid/@djrusspowell

The display of burning passion set the comment section alight with one impressed TikToker exclaiming, “Damn! A full burn to tie the knot.”

“NGL… your wedding is gonna be top 10 for life,” seconded DJ Russ Powell in the comments.

“If my marriage is not going to be this lit I’m leaving him at the alter,” added another awestruck commenter.

“I know that photographer was stressed,” joked one viewer, while another joked about a scenario where the cameraman didn’t capture the moment, typing: “Photographer: ‘Can we have a rerun? I forgot to take off the lens[cap].’ “ 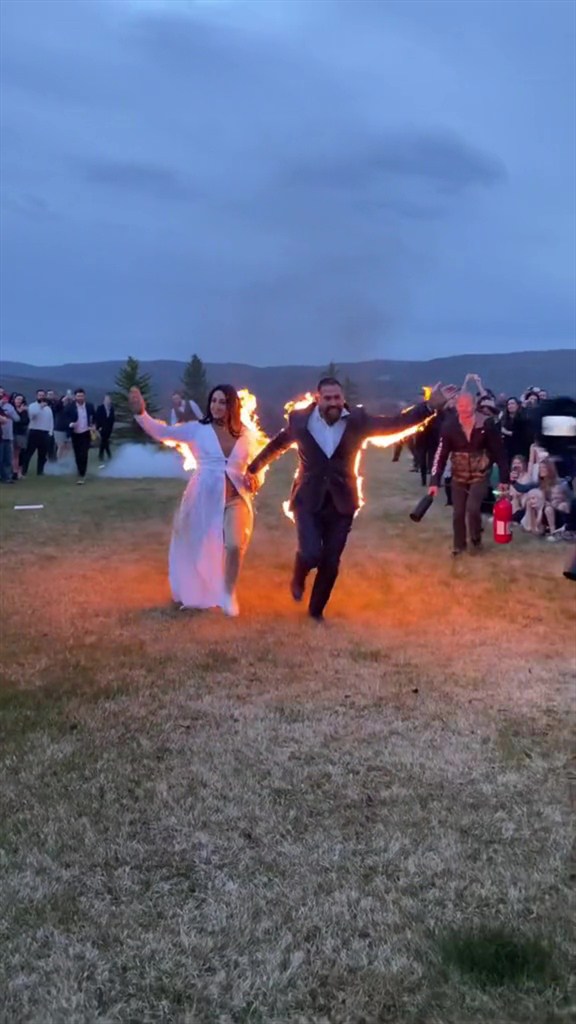 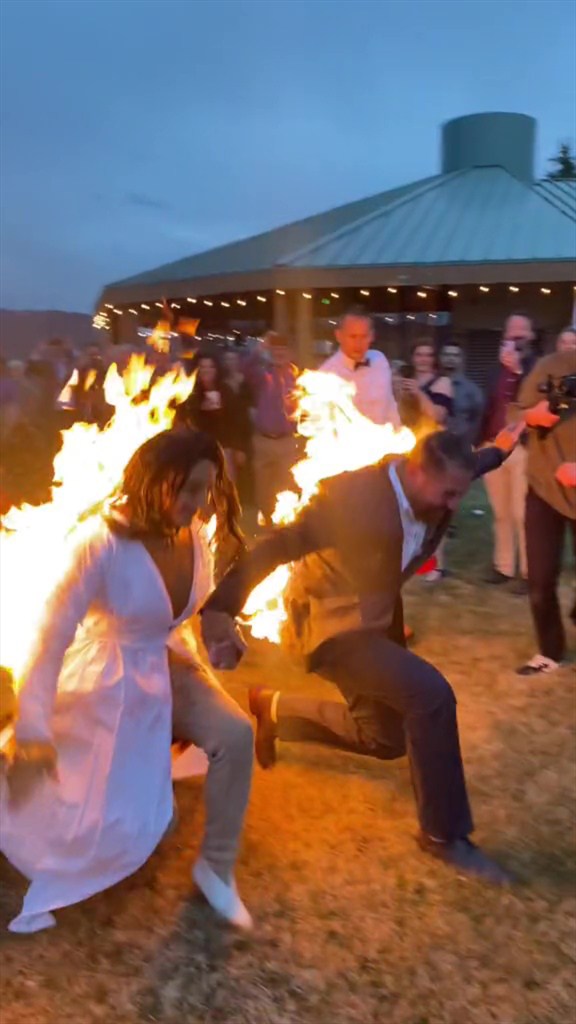 “Please tell me the hair was protected,” one commenter said, to which DJ Russ Powell replied: “They both had anti-burn gel in their hair and face, then she had a wig on top.” The couple then knelt for the fire extinguishers.Jam Press Vid/@djrusspowell 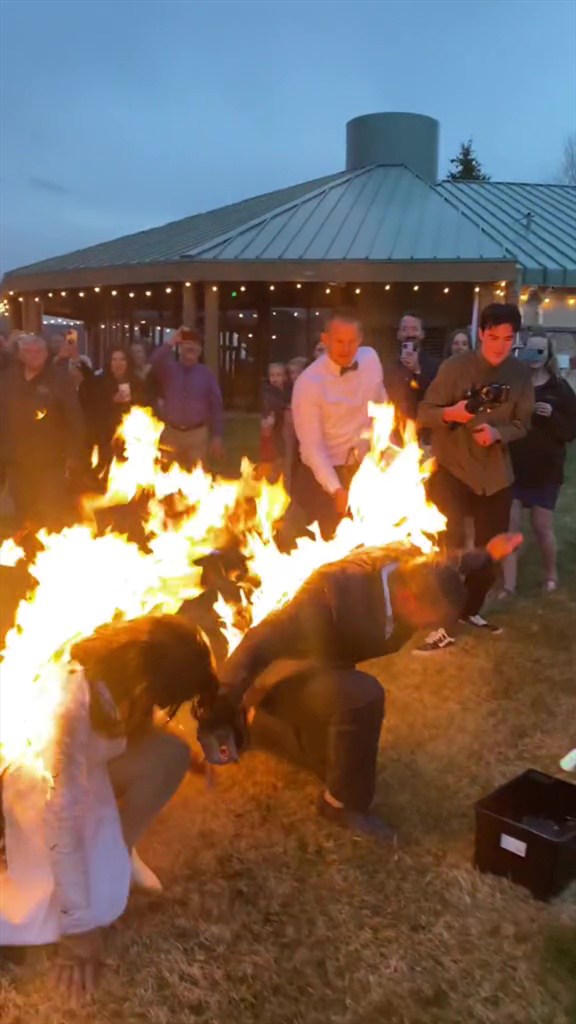 Thankfully, it appeared the couple was unhurt during the pyrotechnic performance.Jam Press Vid/@djrusspowell

However, some concerned commenters wondered if the couple was OK following the fireworks.

“So many things could’ve killed them in this video,” said one social media schoolmarm.

“Please tell me the hair was protected,” said another, to which DJ Russ Powell replied: “They both had anti-burn gel in their hair and face, then she had a wig on top.” They were also reportedly wearing fireproof clothing, Newsweek reported.

The DJ also posted a disclaimer informing viewers that the newlyweds are “trained professionals” and to not “try this at home.” 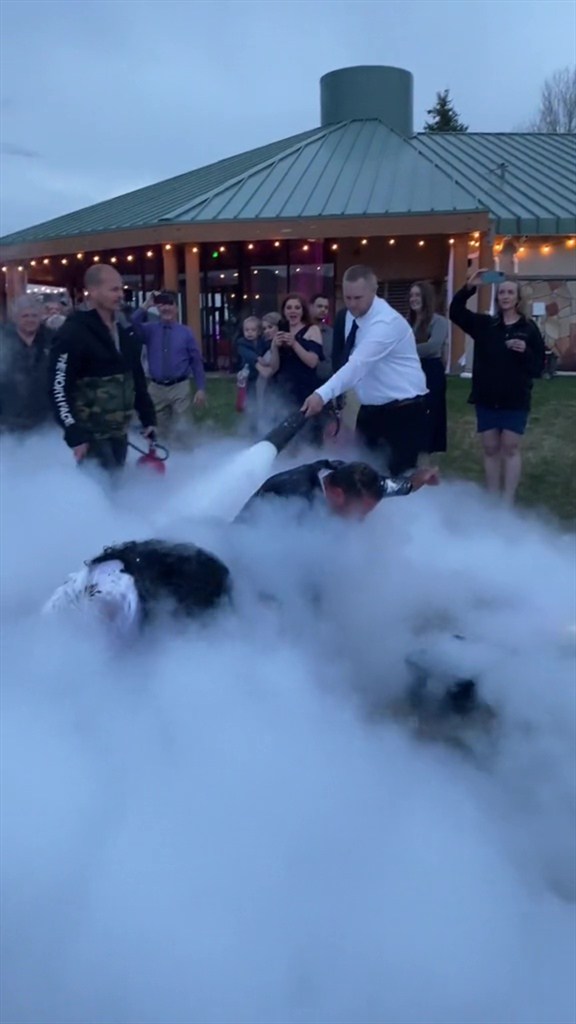 An assistant extinguishes the blaze, and like singed phoenixes, the lovebirds arise.Jam Press Vid/@djrusspowell 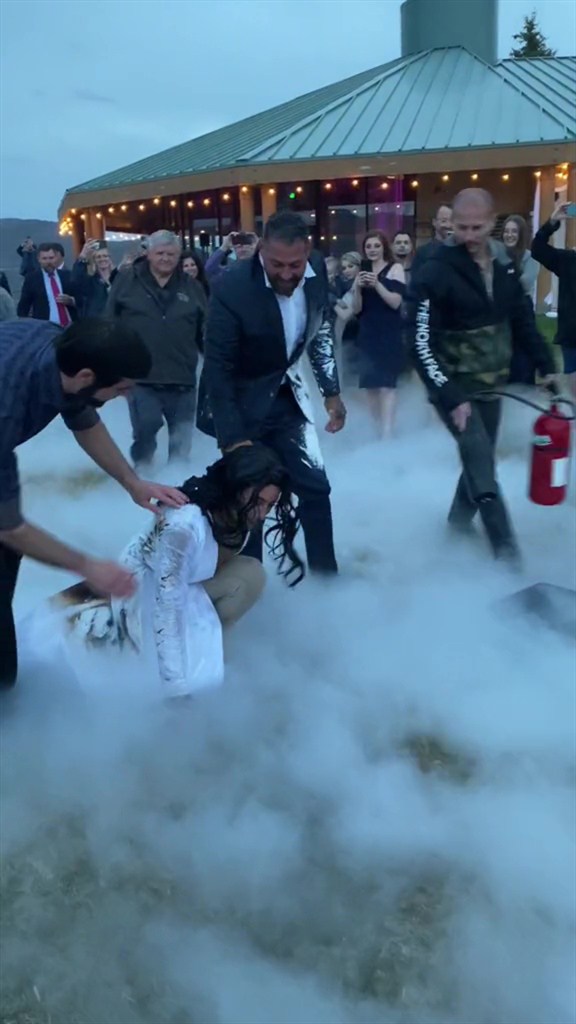 The TikToker posted his viral clip with a disclaimer informing viewers that the newlyweds are “trained professionals” and to “[not] try this at home.”Jam Press Vid/@djrusspowell