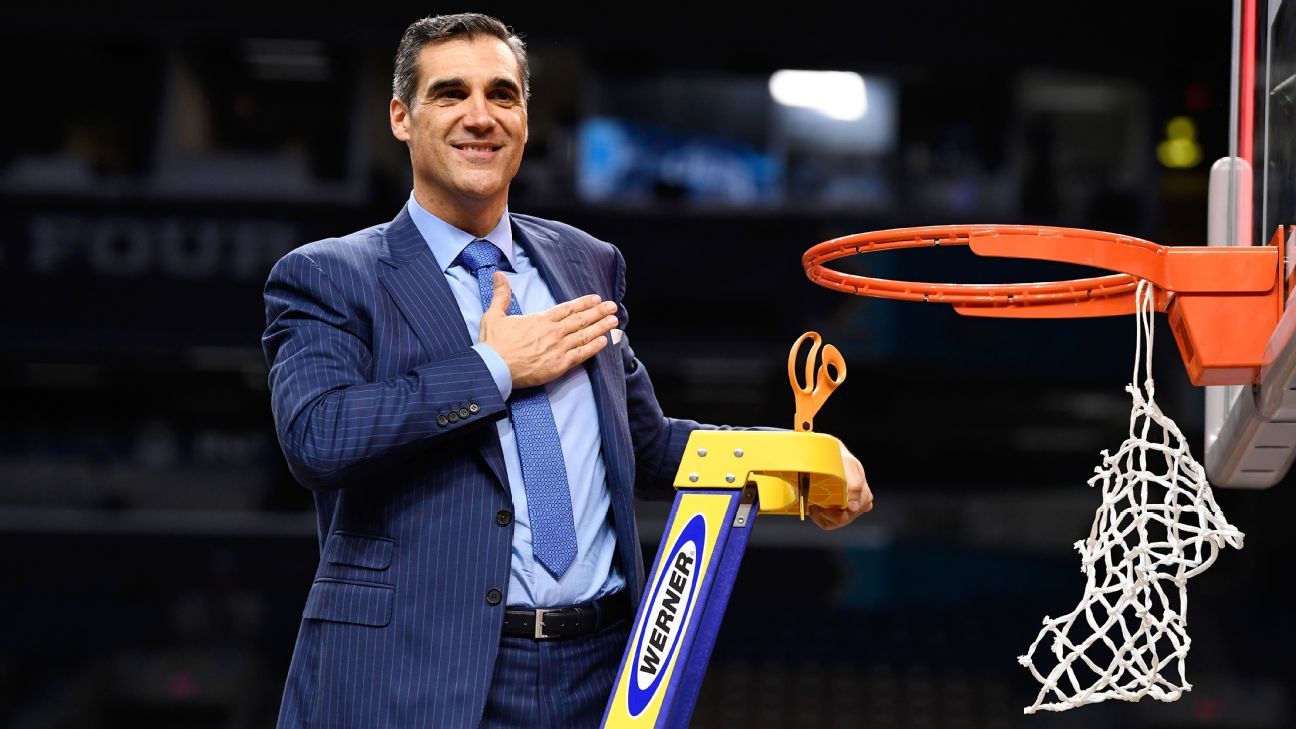 In 2000, I remember calling then-Delaware head coach Mike Brey and asking him what I might be missing in his league, the America East. Brey said, “You need to check out Hofstra. They have a couple of pros, and their coach is the real deal.” Brey was talking about Speedy Claxton and Norman Richardson, and their young coach, Jay Wright. I started watching Hofstra, and I was drawn to Wright.

The next season, after Claxton had graduated, Hofstra made the NCAA tournament and played UCLA in Greensboro, North Carolina. I took a busman’s holiday and went to watch Wright up close, from courtside. UCLA beat Wright’s Hofstra team, and I sought out Wright after the game, the first time we had met and really talked. I was immediately impressed. He was, indeed, the “real deal.” Once you saw it up close, you couldn’t miss it.

In his early days at Villanova, it was tough sledding to get the Wildcat program to the highest level, and Wright was sanguine and humbled over the challenge. Villanova went to the NIT in Wright’s first three seasons. After the 2004 season, Wright was headlining a Villanova alumni event in Charlotte, North Carolina. My friend Mike Gminski and I went to the event to support Jay, and took him to dinner afterward. Over an Italian meal at Primo, Wright mused over the challenge of the job, and whether he could do it. Almost incredulous, Gminski and I said to him that he could not only do it, but he would coach Villanova to multiple Final Fours in his time there. We were both believers.

Of course, that hardly made us Nostradamus. Jay Wright represented the very best the coaching profession had to offer. He was incredibly skilled and competitive, yet had time for everyone. He projected an everyday Joe to the world, yet had extraordinary ability in every area required of the greats. He was humble, yet also knew how good he was, and how good his program is. He struck the best balance of any coach in the game. Nothing seemed to bother Jay Wright. He didn’t even seem to break a sweat.

After reaching his first Final Four in 2009, Wright was in the mix to get the very best of the best in recruiting. Villanova was attracting some of the most highly rated recruits, but the fits at times were not perfect for his way. During a particularly difficult season in 2012, Bill Raftery and I were walking by Villanova’s team meal in South Bend when Wright waved us in after the team had left the room. Wright and his staff were planning out scenarios of missing the Big East tournament, or playing on the first day, which was unthinkable to us. Yet, Wright knew. He told us that he was making changes in recruiting, and his next group was going to have the grit and toughness that Villanova had let slip, unintentionally. From then on, the Wildcat program would have a different focus and attitude, and we would see the results in time. Boy, was he right.

Over the next several years, Jay Wright built the best culture in all of basketball at Villanova. It wasn’t just the NCAA titles in 2016 and 2018, those were the results of the culture. At Villanova, “attitude” was the culture. It was a “we first” value system, and every player not only bought in, they lived it. The older guys taught and mentored the younger guys, and brought them up in the Villanova way. There were programs for the parents, and it was a family atmosphere on and off the court. They went to battle and fought like a motorcycle gang on the floor, yet were Boy Scouts off the floor and did absolutely everything the right way. There was a pride to the program that didn’t need to be talked about or sold to anyone. You could see it, and you could feel it. It wasn’t talk, it was real.

Whether it was USA Basketball or Villanova, Wright was the superstar with the common touch. Name me one person who had a negative word to say about Jay Wright, and I would name you a person who was simply wrong and didn’t know Wright or just didn’t get it. Jay Wright is what a true competitor looks like. He fights like hell to win, yet always humbly gives credit where credit is due, to his team and to his opponent. Always. He is demanding of his players and staff but takes care of them on every conceivable level. He is what a coach is supposed to be, but precious few can operate on his level. I could not have more respect or admiration for a coach or a person than I have for Jay Wright, and I promise you that I am not alone in that. Bill Raftery and I used to keep a list of the coaches we would want to have a drink with after a loss, which was our list of the very best guys in the game. Jay Wright was always at the top of that list. Every time.

Wright holds one very special place for me, and I’m sure it ranks up there with his induction into the Naismith Memorial Basketball Hall of Fame. Wright was the very first guest on “94 Feet.” It was before Villanova played at Virginia, and I had pitched the concept to Wright, and he immediately said yes. In our initial walk, I asked him, “What was your favorite TV show as a kid?” Wright laughed and said, “Wow, that’s a good question.” He then repeated the question and mulled it over until we reached the opposite free throw line. “My God, Jay, you bleeped the whole thing up on just one question?!” He doubled over laughing, and we had to do it again, the only time we have done multiple takes of a 94 Feet segment due to a screw-up. We played the feature and the outtake during the broadcast, and it always makes me smile to think about it. Jay Wright is one of only a select few that could laugh so hard at such a thing, especially before a game.

Wright has tremendous empathy, too. When a coach would be out of work, you could find him at a Villanova practice, watching Wright work, and Jay would always want to know that coach’s thoughts. Always accommodating, and always thinking of others. Wright has uncommon common sense, and has never lost the sensibilities of a young coach scratching and clawing his way up, almost amazed and grateful to have the opportunities so many of us can take for granted.

Jay Wright expresses his gratitude for being elected to the Basketball Hall of Fame.

At age 60, Wright seems too young, too vibrant and too vital to the fabric of the game to retire. This one caught me off guard. I knew it was coming with Mike Krzyzewski because he was 75 years old and at Duke for 42 years. That seemed natural, and orderly. Jay Wright retiring is a gut punch to the game and those who love it so. I expected that Wright would be the standard-bearer in the game for the next decade, and when I heard the rumblings early on Wednesday, I was floored. It simply cannot be true. But, it is.

On one level, I hope Wright is simply content with the decision to move forward with the next phase of his life. Nobody deserves it more. On a selfish level, I hope Wright is not done in the game, in whatever capacity he might choose going forward. Losing a person of the quality and caliber of Jay Wright leaves a very real void, at Villanova, and across the basketball landscape. It shakes you up, in a very real sense. He is that important to the game. We all owe Jay Wright a debt of gratitude for what he had done in the game, for the game, and for all of us. For me, personally, Wright has been a wonderful friend, sounding board and example of how a person should carry himself in every situation.

With Wright’s retirement from Villanova, we are seeing one of the truly great careers and truly great coaching jobs of all time come to an end. It is jarring because we all love him, because Jay Wright is, always has been and will always remain the “real deal.”

Previous post Most older adults want to ‘age in place’ but many haven’t taken steps to help them do so: From home safety and accessibility, to social support, community services and paid in-home help, National Poll on Healthy Aging shows varied preparation