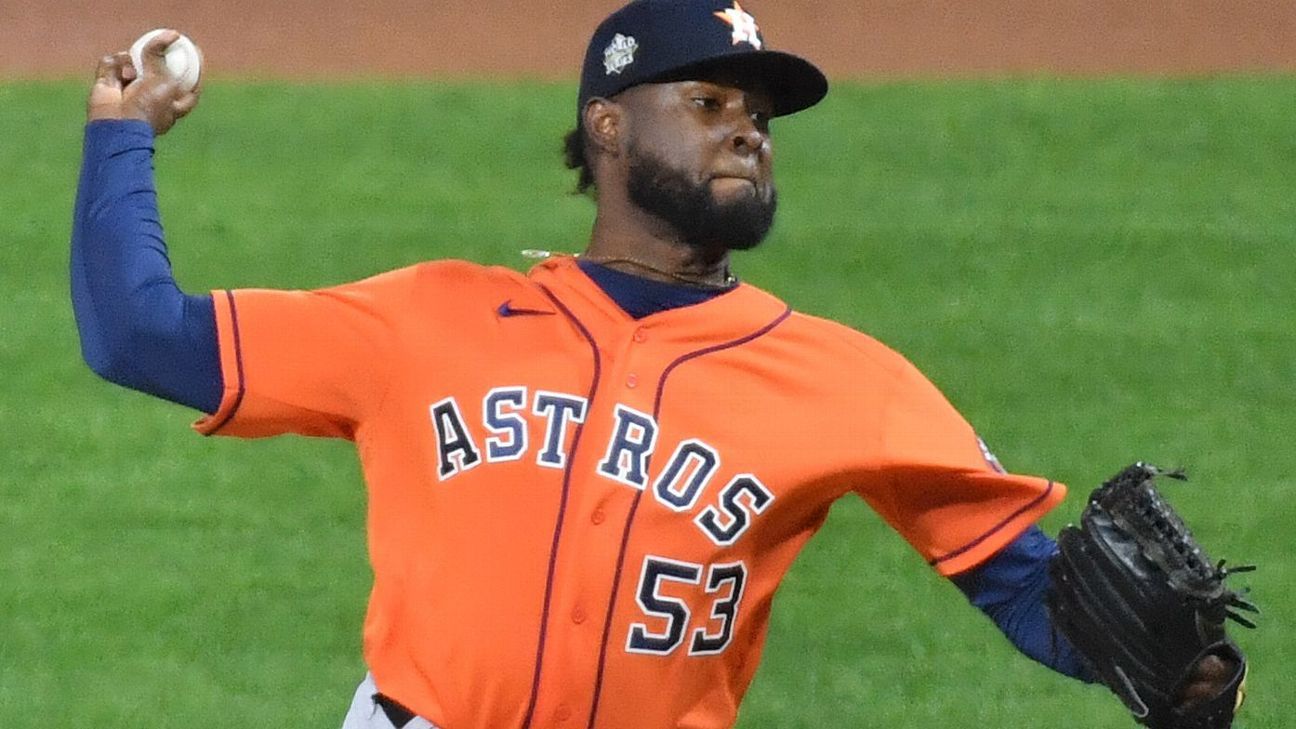 PHILADELPHIA — Cristian Javier’s parents, Trinidad Mieses and Cecilio Javier, flew from the Dominican Republic to Philadelphia and sat in his hotel room late Tuesday night, in the buildup to the biggest outing of his life. The Houston Astros were coming off a difficult loss and needed Javier to rescue them from an overwhelming World Series deficit, but Trinidad and Cecilio attempted to strike an optimistic, supportive tone.

They proved to be prophetic.

Less than 24 hours later, Javier teamed with Astros relievers Bryan Abreu, Rafael Montero and Ryan Pressly in completing the first combined no-hitter in postseason history, using his devastating fastball to vex a helpless Philadelphia Phillies lineup through the first six innings of what became a 5-0 Astros victory in Game 4 on Wednesday. The win tied the Series at two games apiece and placed Javier in exceedingly rare company, joining former New York Yankees right-hander Don Larsen — author of a perfect game in 1956 — as the only pitchers in World Series history to finish an outing with no hits allowed in six or more innings.

“This is the best gift I could have ever given my family, my parents,” Javier said in Spanish. “To me, it’s even more special knowing that they were able to see that in person.”

Javier’s start was a reenactment of the combined no-hitter he played a key role in against the Yankees on June 25, making Javier the first pitcher to start multiple combined no-hitters within a career, let alone the same season. He set the tone for what became the third no-hitter of any kind in the 119 years that Major League Baseball has staged the postseason, and the second — along with Roy Halladay’s in the 2010 National League Division Series, against a Cincinnati Reds team managed by current Astros manager Dusty Baker — that took place at Citizens Bank Park.

“That’s what’s strange about life,” Baker said of finally getting on the right side of a postseason no-hitter. “I remember being on the other end of that. It was the seventh inning and it seemed like it was the second inning, and I looked up on the board and it’s the seventh inning already. Then you’re trying not to be no-hit and then you’re trying to win the ballgame and — yeah, that’s pretty remarkable.”

Javier himself is remarkable. He was signed for $10,000 seven years ago from La Victoria, a small town within Santo Domingo known mostly for the notorious prison that shares its name. He was nearing his 18th birthday then, old in an international market where prospects agree to deals at 12 and 13 years old, and he threw only in the mid-80s. But his fastball was already extremely difficult to hit. As he got stronger, his velocity continued to increase. He became the organization’s Minor League Pitcher of the Year in 2019, established himself as a dynamic weapon — in the rotation or out of the bullpen — in 2020 and 2021, and reached a new level in 2022, posting a 2.54 ERA in 148⅔ regular-season innings.

As the year went on, Javier only got better.

“Just going into today’s game, we had so much confidence in him,” Astros center fielder Chas McCormick said. “Even coaches, I had a feeling — Javier’s going to shove today. And he’s been shoving.”

Javier struck out nine batters and issued just two walks through the first six innings. At the start of the fourth, he began a stretch of five consecutive strikeouts. In the sixth, the pitcher with the lowest groundball rate in the majors during the regular season — among those who compiled at least 140 innings — benefitted from three consecutive groundouts. At that point, Javier became the first pitcher to reach six no-hit innings in the World Series since Jerry Koosman in 1969.

Javier did it, of course, with his four-seam fastball. He threw it 72% of the time, the highest percentage of his major league career, and recorded 14 of his 18 outs — including two-thirds of his strikeouts — with that pitch. He also got 27 foul balls off it, the most of any pitcher on a singular pitch in a game this season, according to research by ESPN Stats & Information. It was a sign that the Phillies were consistently late, the main characteristic Astros co-pitching coach Joshua Miller looks for in Javier.

“It’s a good fastball,” Phillies left fielder Kyle Schwarber said. “He’s got good extension, good ride, things like that. When it says ’92’ up on the board, it’s playing a little bit harder than that.”

The Astros let Javier extend all the way to 115 pitches while recording the first 21 outs of the combined no-hitter at Yankee Stadium in late June. A little more than four months later, he was pulled after throwing 97 pitches through 18 outs, in part, Miller said, so they could potentially use him out of the bullpen later in this series.

By that point, the Astros’ offense had already scored five runs — all in the fifth, when Jose Alvarado inherited a bases-loaded, none-out situation and proceeded to plunk Yordan Alvarez, then gave up a two-run double to Alex Bregman, a sacrifice fly to Kyle Tucker and a run-scoring single to Yuli Gurriel. Abreu entered in the bottom of the seventh and struck out the side despite facing the heart of the Phillies’ order.

He said he had no idea that he had inherited a no-hitter in progress. He found out an inning later, when he was in the clubhouse and heard his teammates get really animated as Montero took the ball for the eighth inning.

“I was shocked,” Abreu said in Spanish.

Montero followed suit by retiring all three batters, the last on a 99 mph Jean Segura line drive hit directly at Astros right fielder Tucker — a batted ball that came with an expected batting average of .910. Pressly, the Astros’ dominant closer, then finished it off in the ninth, just like he did in late June, this time working around a walk to record three outs on a Brandon Marsh strikeout, a Rhys Hoskins flyout and, lastly, a J.T. Realmuto groundout.

“You get slapped in the face yesterday and go back today and make a statement,” said Pressly, who watched the Phillies crank out five home runs against Lance McCullers Jr. in the Game 3 loss. “You try to have the mind of the goldfish in this game. You try not to think about anything. You just want to go out there and try to produce and put a ‘W’ in the column.”

There have been 18 combined no-hitters throughout major league history, but none have come particularly close to occurring in the postseason. The only other one that extended through seven innings was done by the Atlanta Braves, against these Astros, in Game 3 of last year’s World Series. Javier, Abreu, Montero, Pressly and Astros catcher Christian Vazquez, who filled in for Martin Maldonado largely because of how well he works with Javier, all posed with the baseball on the field postgame. The National Baseball Hall of Fame preserved one of the baseballs Javier pitched with and got it signed by all five players, also keeping a rosin bag and John Smoltz’s scoresheet.

“It’s a very special day for us,” Vazquez said.

It was even more special for Javier because of who attended. His mother, Trinidad, has been able to see him a handful of times, but Wednesday marked the first time his father, Cecilio, has been able to take in one of his major league games in person. Their prediction ultimately helped.

“I knew I had a very important start in front of me,” Javier said. “When they told me [that I was going to throw a no-hitter], it gave me faith.”