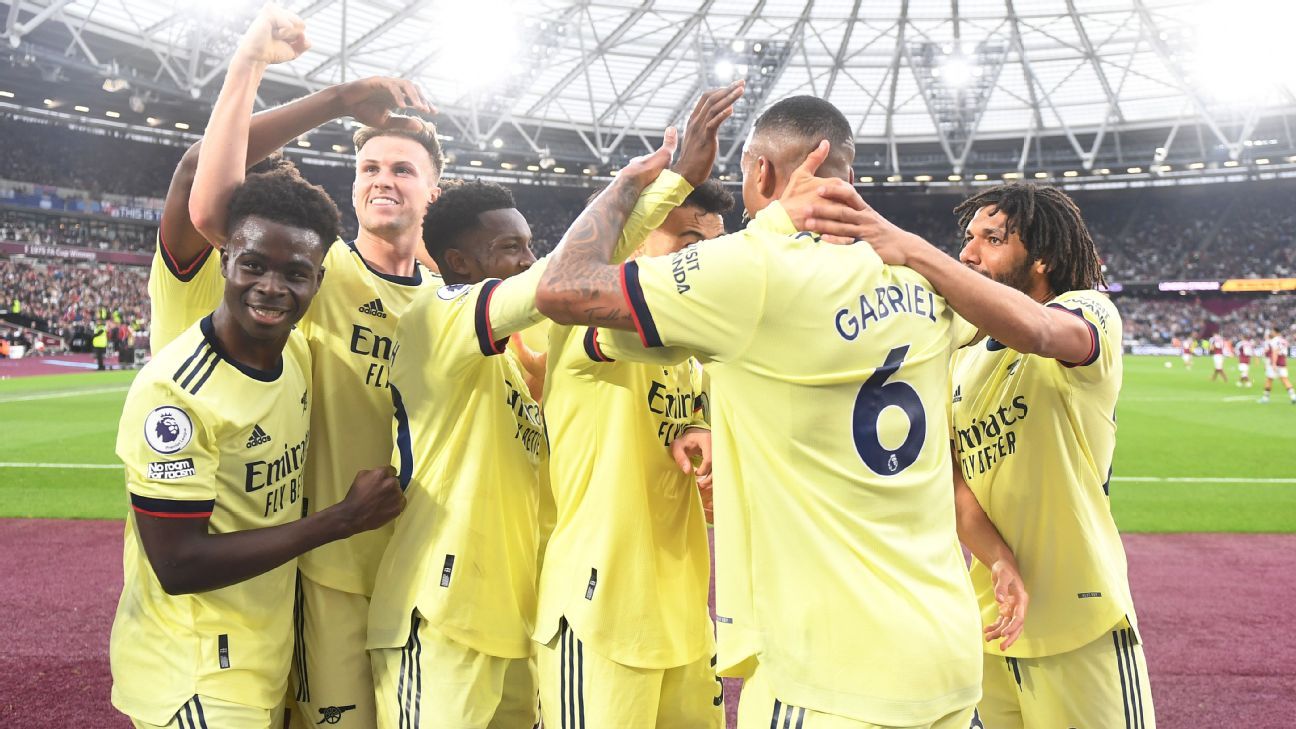 LONDON — It has long felt as though Arsenal’s absence from Europe this season would provide them a telling advantage at some stage, and Sunday’s 2-1 win at West Ham was it. The timing of this game could not have been better for them, coming in the middle of West Ham’s first two-legged semifinal for 46 years — something their manager, David Moyes, has openly admitted prioritising — while the Gunners enjoyed a clear week in which to finalise their preparations.

Perhaps they spent the week working on set pieces? Both goals came from corners delivered by Bukayo Saka, the first converted by Rob Holding after 38 minutes of utterly turgid football to that point. (Moyes later wondered if Holding had handled Saka’s initial delivery.) Jarrod Bowen’s deflected equaliser restored parity on the stroke of half-time before West Ham faltered at the back again, failing to deal with Saka’s delivery as Gabriel Martinelli returned the ball back across goal for Gabriel to head beyond Lukasz Fabianski.

Moyes only felt able to field one recognised centre-back at kick-off, with Craig Dawson suspended and Thursday’s Europa League semifinal, second leg against Eintracht Frankfurt in his mind, and so Arsenal scoring through both their central defenders rammed home that particular edge somewhat pointedly. But it was more than that. The London Stadium was subdued throughout, punctuated by a smattering of empty seats — a degree of ambivalence explained by one West Ham supporter leaving the ground at full-time, saying “we’ve got bigger fish to fry” in reference to overturning that 2-1 first leg deficit in Frankfurt.

West Ham surrendered any hope of gatecrashing the top four a while ago, and Sunday was their 52nd game of a gruelling campaign, 11 more than Arsenal have played. They have won just four of their past 14 games in all competitions as exertions at home and abroad begin to catch up with them. Arsenal lost a Europa League semifinal against Villarreal last season and finished eighth in the table, with the silver lining being more time between matches for Arteta to implement his ideas.

“My goodness, it has made a difference from day one,” Moyes said. “Arsenal’s improvement this year has been incredible because probably not being involved in Europe has given them a chance to prepare correctly for games. While you’ve got a young team and you’re trying to get a good enough squad together … even last year, Arsenal were in the semifinal of the Europe League last year, we’re in it this year, and it became quite a difficult season for them because of that. So, we’re a bit the same.”

Moyes made five changes to his lineup, with Michail Antonio, Andriy Yarmolenko and Tomas Soucek among those parked on the bench. All three came on in the final 20 minutes, but there was no discernible increase in tempo or intensity. What was perhaps more surprising was Arsenal’s reluctance to seize the initiative. This was a dreadful game in large parts, an end-of-season feel markedly at odds with the magnitude of its ramifications. Arteta admitted afterwards that his players knew Tottenham had won against Leicester earlier in the day, taking them above Arsenal into fourth place by the time the Gunners kicked off, and perhaps the fine margins in play contributed to an inhibited performance.

“You have to find a way to win, and today we won ugly,” he said.

Arsenal’s rally in the second half to find a winning goal speaks to what’s building under Arteta, and it might also be the difference between another disappointing season and a top-four finish. Stuart MacFarlane/Arsenal FC via Getty Images

The match turned on a pivotal two-minute spell when Arsenal goalkeeper Aaron Ramsdale rushed out to meet a surging Bowen seven minutes after the restart. It seemed a rash move that could result in a red card, but Ramsdale somehow missed both the ball and Bowen, who dived to earn himself a yellow card instead. With their next attack, Saka forced Fabianski to turn a low shot behind at his near post and from the resulting corner, Gabriel eventually scored.

“The goalkeeper is reckless and Jarrod gets there first,” said Moyes about the incident. “If Jarrod had done what I’ve seen hundreds of strikers do recently and maybe leave his leg there and take the hit, I think it would have been a completely different story for both us and Arsenal. The scenario would have changed … It made the job easier for the referee.”

It is the stage of the season where results are paramount, and the prospect of Tottenham facing a daunting trip to Liverpool next weekend increases the chances Arsenal may have a healthy cushion in the top-four race when the north London derby takes place on May 12. But they will need to improve to maintain consistency in the run-in, with three consecutive wins (over Chelsea, Man United and West Ham) following on from three defeats (against Crystal Palace, Brighton and Southampton) underlining the fragility of their form. Takehiro Tomiyasu returned to the line-up only to later hobble off injured, while Nuno Tavares had one of those all-action afternoons in which he looks simultaneously a threat and a liability in almost every passage of play.

Arsenal’s full-back situation remains perilous, but Holding offset Ben White’s absence (hamstring injury) by producing an authoritative display at the back and his first Premier League goal. Ramsdale joked to Sky Sports afterwards that “it only took six years and a new hairline,” and it may prove a vital contribution.

It is also a result that confirms Arsenal will play European football in some form next season, the Europa League at a minimum. They will need a bigger, better squad to compete on two fronts, but this one is suddenly ticking along in the Premier League promisingly once again.