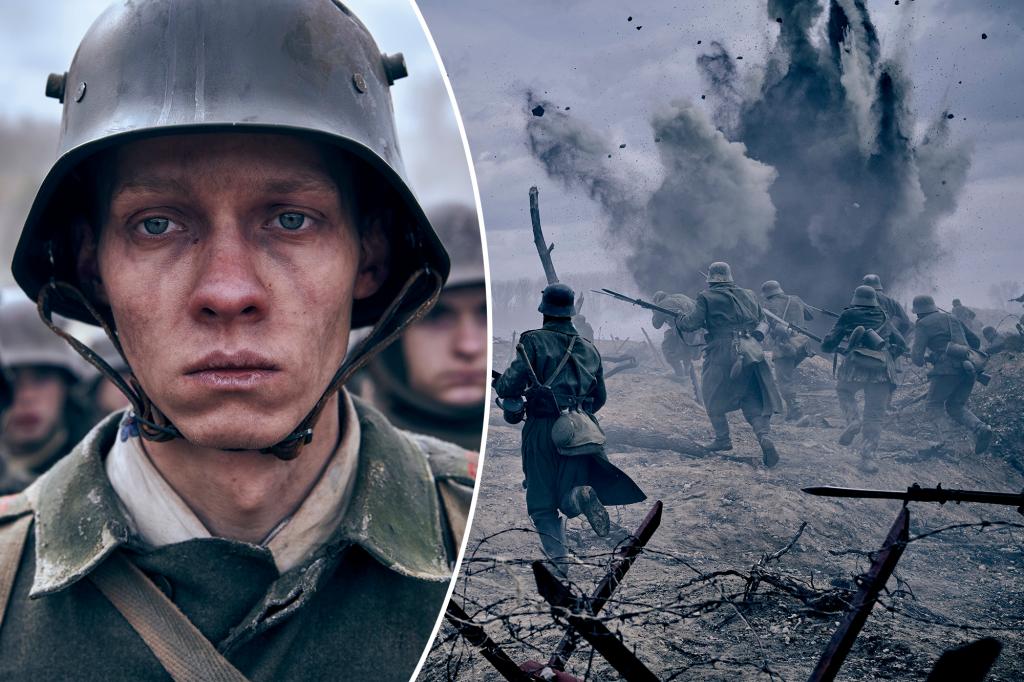 “All Quiet on the Western Front” has been riding a wave of renewed buzz since it dropped on Netflix last week. Could it become the first German movie to ever be nominated for the Best Picture Oscar?

It could be helped along by relevancy. The message of “All Quiet” is a loud one: war is hell.

Based on Erich Maria Remarque’s 1929 World War I novel, the German film on Netflix is unsparing in its portrayal of the horrors of battle.

It’s sensory-overload, tough-though-rewarding viewing. Gargantuan and detailed (and with English subtitles), it’s a rotten shame the movie has been mostly relegated to TV streaming and not getting a wide theatrical release. The film deserves the grandest canvas — not an old Dell laptop.

As we’ve come to expect from this well-worn genre, armies pour out of the trenches to find bombs and bullets, and characters we love die along the way. The key difference — and this is true to the book — is that there is no bravery or valor here, no rousing soundtrack of bold victory, nothing remotely good.

The movie also doesn’t play up the enemy. During the most harrowing scene of director Edward Berger’s film, German soldier Paul (Felix Kammerer) repeatedly stabs a gun-toting French solider to save his own life. But he doesn’t die instantly. The man wheezes and convulses for minutes. Scared and ashamed, Paul begins to clean the soldier’s face. Shattering stuff.

“All Quiet” makes the point, just as Sam Mendes’ “1917” so memorably did in 2019, that the Great War was fought by kids with their whole lives in front of them. Much of a generation of Europeans was needlessly lost to the violence.

That horrible fact is nodded to in another scene, when Paul’s pal Kat (Albrecht Schuch) distraughtly observes a room littered with his compatriot’s corpses, and says, “Soon, Germany will be empty.” 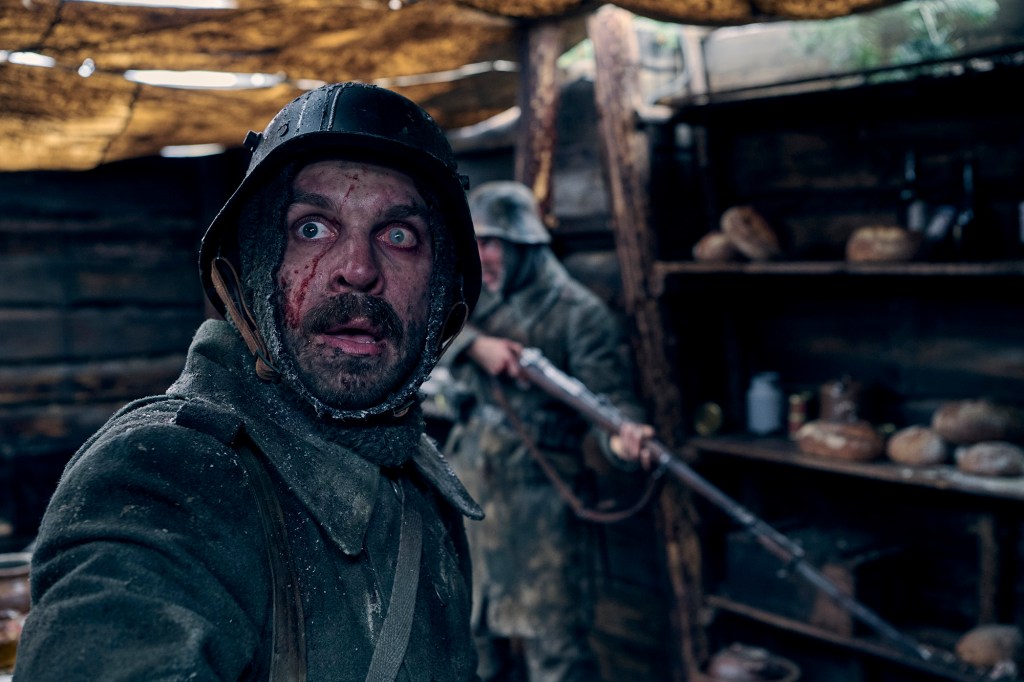 Tjaden (Edin Hasanović) fights alongside Paul in “All Quiet on the Western Front.” Reiner Bajo

The grotesque and traumatizing reality of war was not what Paul expected to find after his teacher, Kantorek, extolled the virtues of fighting for the fatherland. “The Kaiser needs soldiers — not children!” he shouts to smiles and rapturous applause from students. Paul and Co. enthusiastically enlist.

Almost immediately upon arriving on the battlefield, though, Paul comes face to face with constant death and agony. The shell-shocked realization brings to mind reports of young Russian soldiers, who had no idea they were being sent off to an actual war in Ukraine.

Berger blends the fighting into a congealed mass of ceaseless, bloody conflict. Gregarious generals don’t draw up ingenious plans and there is no nervous anticipation for the next frightening encounter. It’s non-stop, virtueless brutality. 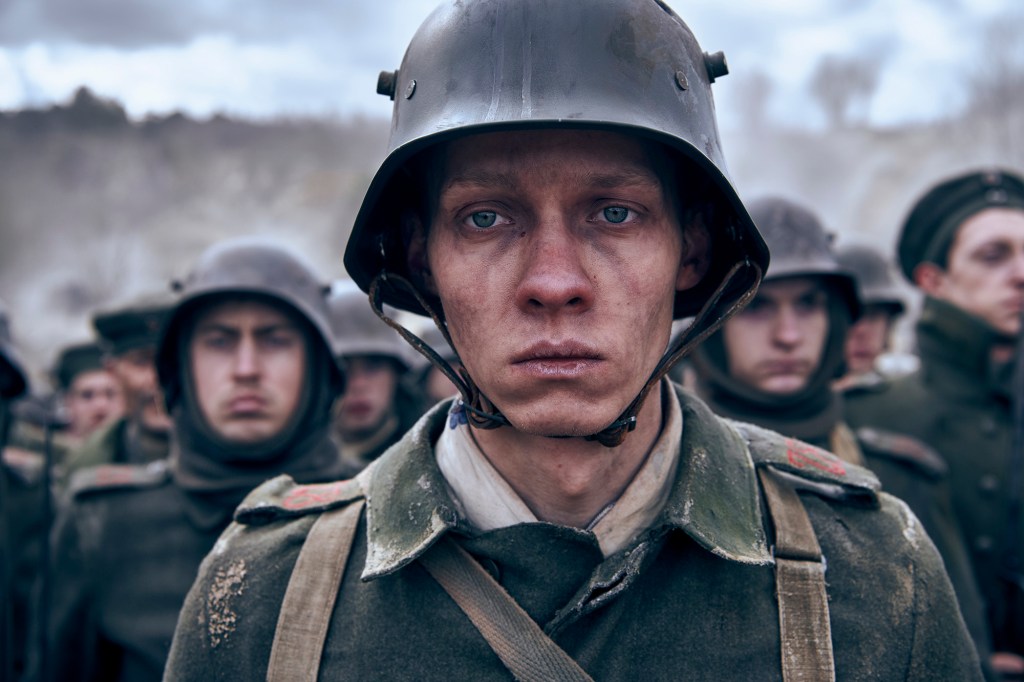 Occasionally the carnage is broken up with somber ceasefire negotiations between the Kaiser and France. The talks are a needed respite, but also the least successful aspect of the movie.

Making his screen debut as Paul is the gut-wrenching Kammerer. The talented newcomer has a malleable face that abruptly morphs from wide-eyed schoolboy optimist to tortured soul. In a film with no obvious warmth or lightness, his authentic presence gives the film a beating heart and soul. 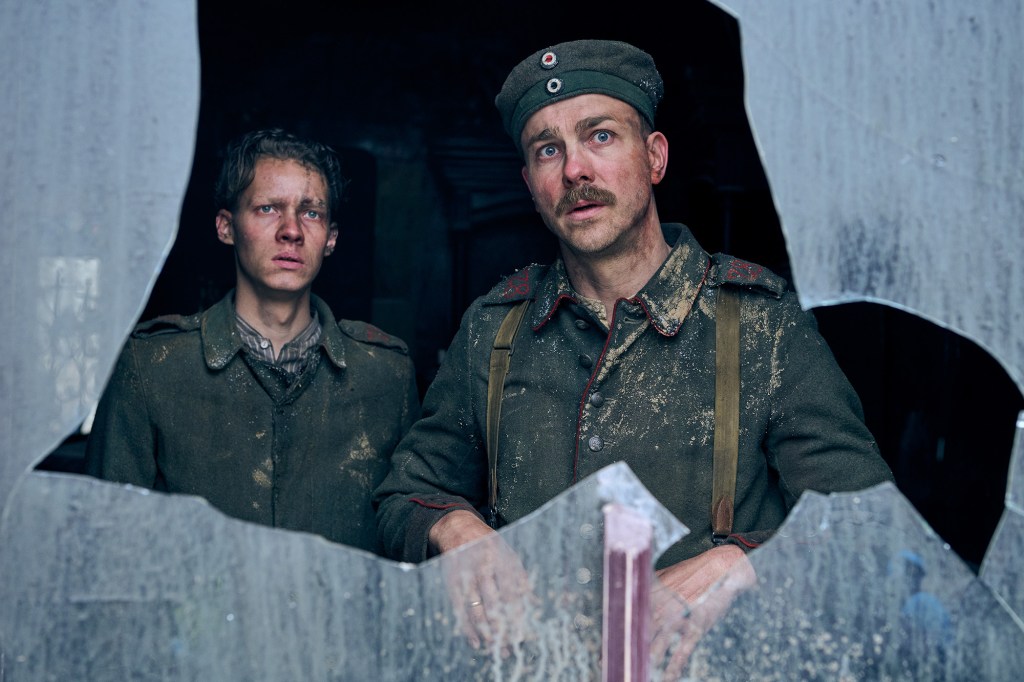 “All Quiet on the Western Front” is Germany’s submission for the Best Foreign Film Oscar, and now that there are ten Best Picture slots it has a shot at consideration for the top prize as well. Keep in mind, though, that remakes almost never win, and Lewis Milestone’s 1930 version itself won Best Picture. Plus, it’s extremely rare for a foreign language film to make it into that category.

While I preferred the cinematic sweep and novelty of “1917,” as far as recent World War I films go, “All Quiet” rings truer to the lifelong wounds war imparts, long after the bombs have stopped and the smoke has cleared.